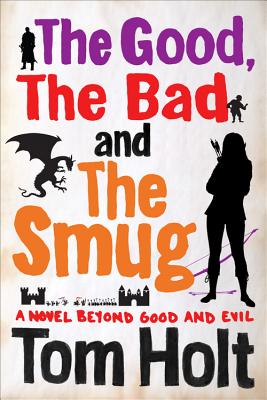 The Good, The Bad and The Smug

A new novel from a master of comic fantasy, Tom Holt.

Same as the Old Evil, but with better PR.

Mordak isn't bad, as far as goblin kings go, but when someone, or something, starts pumping gold into the human kingdoms it puts his rule into serious jeopardy. Suddenly he's locked in an arms race with a species whose arms he once considered merely part of a calorie-controlled diet.

Helped by an elf with a background in journalism and a masters degree in being really pleased with herself, Mordak sets out to discover what on earth (if indeed, that's where he is) is going on. He knows that the truth is out there. If only he could remember where he put it.

Praise For The Good, The Bad and The Smug…

"This is a must-read for those who grew up in awe of The Phantom Tollbooth...Holt achieves near-perfection in his new comic fantasy."—Publishers Weekly on The Good, The Bad and The Smug (Starred Review)

"Tom Holt's Doughnut presents a roller-coaster ride through the world of physics and the origins of the universe."—Library Journal

"A light read from the prolific humorist; a romp round the multiverse."
—SFX on Doughnut

"Like the deep-fried snack after which it's named, this sci-fi novel is sweet and fun."
—Sun (UK) on Doughnut

"Holt adds to his repertoire of comedic sf, one of the most difficult genera acts to master. Theo is an engaging hero; his brilliance is counteracted by his laziness and his compassion, which is matched by his sense of survival. Place this title alongside Terry Pratchett and Neil Gaiman's Good Omens, Pratchett's "Discworld" series, and the absurdist works of mainstream authors such as John Barth and Gilbert Sorrentino."—Library Journal (Starred Review) on Doughnut

"One for physicists as well s Krispy Kreme-loving policemen."
—T3 on Doughnut

Tom Holt was born in London in 1961. At Oxford he studied bar billiards, ancient Greek agriculture and the care and feeding of small, temperamental Japanese motorcycle engines; interests which led him, perhaps inevitably, to qualify as a solicitor and emigrate to Somerset, where he specialized in death and taxes for seven years before going straight in 1995. He lives in Chard, Somerset, with his wife and daughter.
Loading...
or
Not Currently Available for Direct Purchase