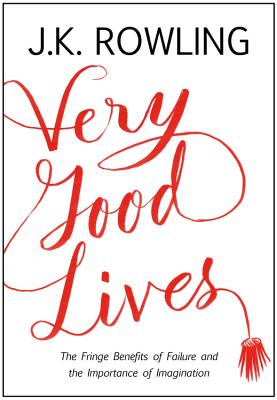 The Fringe Benefits of Failure and the Importance of Imagination

J.K. Rowling, one of the world's most inspiring writers, shares her wisdom and advice.

In 2008, J.K. Rowling delivered a deeply affecting commencement speech at Harvard University. Now published for the first time in book form, VERY GOOD LIVES presents J.K. Rowling's words of wisdom for anyone at a turning point in life. How can we embrace failure? And how can we use our imagination to better both ourselves and others?

Drawing from stories of her own post-graduate years, the world famous author addresses some of life's most important questions with acuity and emotional force.


Praise For Very Good Lives: The Fringe Benefits of Failure and the Importance of Imagination…

"Humble and moving, full of ideals one hopes the world's most privileged young people will take to heart."
—Ron Charles, Washington Post

"It's sure to be a favorite gift for new graduates."
—Michael Giltz, Huffington Post

"One of the author's all-time most inspirational speeches."
—Josh Wigler, MTV.com

J.K. Rowling is the author of the bestselling Harry Potter series and The Casual Vacancy, a novel for adults. Under the pseudonym Robert Galbraith, she is the author of the Cormoran Strike crime series, including The Cuckoo's Calling and The Silkworm. As well as an Order of the British Empire for services to children's literature, she is the recipient of numerous awards and honorary degrees. She lives in Edinburgh.
Loading...
or support indie stores by buying on