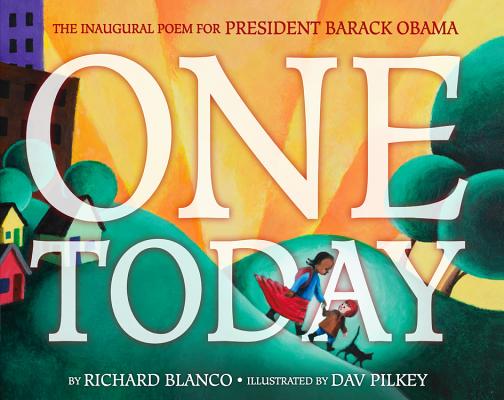 One Today is a poem celebrating America.

That poem is One Today, a lush and lyrical, patriotic commemoration of America from dawn to dusk and from coast to coast.

Brought to life here by beloved, award-winning artist Dav Pilkey, One Today is a tribute to a nation where the extraordinary happens every single day.

Praise For One Today…

"I'm honored that Richard Blanco will join me and Vice President Biden at our second Inaugural. His contributions to the fields of poetry and the arts have already paved the path forward for future generations of writers. Richard's writing will be wonderfully fitting for an Inaugural that will celebrate the strength of the American people and our nation's great diversity."
—President Barack Obama

"One Today is an evocative visual rendering of the poem Richard Blanco composed for President Obama's second inauguration. The fullness of our multicultural society on display in this remarkable read can lead to talk about how the United States exemplifies the words on our national seal...."—Los Angeles Times

*"Richard Blanco is a graceful wordsmith, and Pilkey transforms his poem into a story that children can make their own."
—Publishers Weekly, starred review

*"There are themes, motifs, and details that will make this a book to be read and reread, or simply looked at--for the images tell many stories too."
—Booklist, starred review

*"When it was read, the poem was instantly acclaimed; Pilkey's visual interpretation fully--and joyfully--honors it."
—Kirkus, starred review

"Illustrations are full-color and bright, with strong hues, great perspective, and simplicity, to highlight and accurately reflect the theme. The text and illustrations can be used for a variety of activities and instruction."—School Library Connection

Richard Blanco is an award-winning American poet, storyteller, teacher, public speaker, and memoirist. He lives with his partner in Maine.

Dav Pilkey has created many beloved books, including those in the Captain Underpants series and Caldecott Honor award-winning The Paperboy. He lives with his wife in the Pacific Northwest.
Loading...
or
Not Currently Available for Direct Purchase