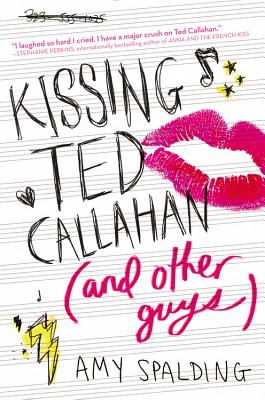 Kissing Ted Callahan (and Other Guys)

Sneak out. Make out. Rock out.

Riley and her best guy friend, Reid, have made a pact: they'll help each other pursue their respective crushes, make something happen, and document the details in a shared notebook.

While Reid struggles with the moral dilemma of adopting a dog to win over a girl's heart, Riley tries to make progress with Ted Callahan, the guy she's been obsessed with forever. His floppy hair! His undeniable intelligence! But between a chance meeting with a fellow musician in a record store and a brief tryst with a science-geek-turned-stud-not to mention Ted's own tentative attentions-cute guys are suddenly popping up everywhere. How did she never notice them before?! As their love lives go from zero to sixty in the blink of an eye, Riley and Reid's pact may prove to be more than they bargained for.

Filled with cute dogs, cute boys, and a few awkward hookups, this hilarious tale from Amy Spalding chronicles the soaring highs and embarrassing lows of dating in high school.

Praise For Kissing Ted Callahan (and Other Guys)…

"It's refreshing to see a boy-girl friendship built on mutual support that doesn't drift into romance...Riley's voice is irreverent and funny."—Publishers Weekly

"Riley and Reid are witty and believable, and Spalding's story has tons of teen appeal."—VOYA

"Character driven... this book will appeal most to teenagers questioning and exploring romantic relationships....Most readers will find the notebook entries (done in a handwriting-like font) humorous and relate to the confusing feelings that come from acting on a crush or trying to date in high school. Recommended for teens looking for realistic stories without a hefty amount of drama."—SLJ

"Riley and I became besties immediately...I cackled (and maybe even snorted) my way through this novel in one afternoon, but don't let that fool you. There's plenty of substance in Riley's story, and her trials and tribulations strike an authentic chord that can still be heard over the din of laughter."—Sarah Pitre, Forever Young Adult

"I laughed so hard I cried. Twice. I have a major crush on Ted Callahan."—Stephanie Perkins, New York Times bestselling author of Anna and the French Kiss and Lola and the Boy Next Door

"Kissing Ted Callahan (and Other Guys) is hugely fun and full of our favorite things: secrets, shenanigans, and SO many cute boys."—Heather Cocks and Jessica Morgan, authors of Spoiled and Messy

Amy Spalding grew up in St. Louis, but now lives in the better weather of Los Angeles. She received a B.A. in Advertising & Marketing Communications from Webster University, an M.A. in Media Studies from The New School, and currently manages digital media planning for an advertising agency specializing in indie film. Amy studied longform improv at the Upright Citizens Brigade Theatre, and can be seen performing around L.A. Amy is also the author of Kissing Ted Callahan (and Other Guys), The New Guy (And Other Senior Year Distractions), The Reece Malcolm List, and Ink Is Thicker than Water.
Loading...
or
Not Currently Available for Direct Purchase