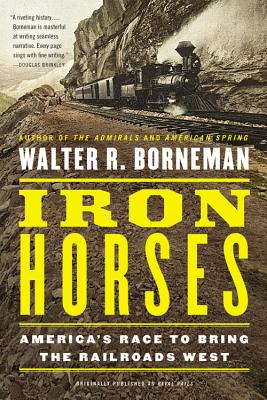 A "masterly" account of the origins of the transcontinental railroad (Douglas Brinkley) by the author of the bestselling The Admirals.
After the completion of the first transcontinental railroad in 1869, the rest of the United States was up for grabs, and the race was on. The prize: a better, shorter, less snowy route through the American Southwest, linking Los Angeles to Chicago.

In Iron Horses, Borneman recounts the rivalries, contested routes, political posturing, and business dealings that unfolded as an increasing number of lines pushed their way across the country. Borneman brings to life the legendary robber barons behind it all and also captures the herculean efforts required to construct these roads -- the laborers who did the back-breaking work, the brakemen who ran atop moving cars, the tracklayers crushed and killed by runaway trains.

From backroom deals in Washington, DC, to armed robberies of trains in the wild deserts, from cattle cars to streamliners and Super Chiefs, all the great incidents and innovations of a mighty American era are made vivid in Iron Horses.

"A riveting history of the frenetic race to construct a railroad across the great American Southwest following the Civil War. Borneman is masterful at writing seamless narrative. Every page sings with fine writing." -- Douglas Brinkley, author of The Wilderness Warrior—-

"In this richly detailed and sprightly narrative, Walter Borneman paints a compelling portrait of one of the great chapters in American history. Readers puzzled by the pace of technological change in our own time will learn in these pages that there is nothing new under the sun." -- Jon Meacham
—-

"Brisk, colorful, and exciting... A worthy look at a less-publicized aspect of railroad construction." -- Booklist—-

"Borneman's telling of this story is admirable foremost because of its detail and historical accuracy; his extensive research is put to good use. But he also is a gifted storyteller, and he introduces his readers to an array of characters who are part of this transcontinental treasure hunt.... Borneman's book is an enjoyable read for railroad buffs, Old West aficionados, serious-minded historians and anyone who finds romance in the sound of a train whistle in the night." -- BookPage—-

Praise for The Admirals:

"Superbly reported... Borneman tackles the essential question of military leadership: What makes some men, but not others, able to motivate a fighting force into battle?" -- Tony Perry, Los Angeles Times—-

"Engagingly written and deeply researched... Mr. Borneman makes it easy to understand the complex series of maneuvers and counter-maneuvers at Leyte Gulf...which is not always the case with accounts of the battle." -- Andrew Roberts, Wall Street Journal—-

"A riveting introduction to the only four men in American history to have been promoted to the five-star rank of Admiral of the Fleet in recognition of their extraordinary feats." -- The History Channel
—-

Walter Borneman is the author of eight works of nonfiction, including The Admirals, 1812, The French and Indian War, and Polk. He holds both a master's degree in history and a law degree. He lives in Colorado.
or support indie stores by buying on