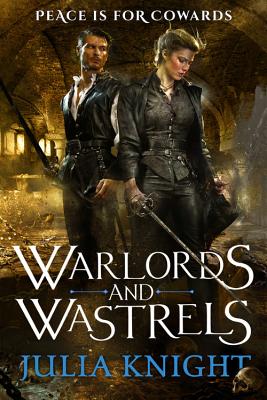 Warlords and Wastrels (The Duelists #3)

The epic conclusion to the fast-paced new adventure fantasy series, the Duelists trilogy, from one of the most exciting new talents in fantasy.
Vocho and Kacha may be known for the first swordplay in the city of Reyes, but they've found themselves backed into a corner too often for their liking.

Finally reinstated into the Duelist's Guild for services rendered to the prelate, who has found himself back in charge, Vocho and Kacha are tasked with bringing a prisoner to justice. But this prisoner is none other than Kacha's old flame Egimont. The prelate wants him alive, and on their side. However the more they discover of Egimont and his dark dealings with the magician, the more Kacha's loyalties are divided. Soon she must choose a side -- the prelate or the king, her brother or her ex-lover.

The fate of Reyes is balanced on a knife-edge. . .

Praise For Warlords and Wastrels (The Duelists #3)…

"Roguish highwaymen and all the intrigue of a bloody revolution... will keep you guessing until the end. I can't wait to read the sequel!"
—Anne Lyle, author of The Alchemist of Souls on Swords and Scoundrels

"Will hold readers in suspense and eager for the next two books."
—Booklist on Swords and Scoundrels

"Knight brings an unusual and satisfying level of psychological depth to her protagonists... compelling."
—RT Book Reviews (4.5 stars) on Swords and Scoundrels

Julia Knight is married with two children and the world's daftest dog. She lives in Sussex, UK and when not writing she likes motorbikes, watching wrestling and exploring new ways to get a giggle out of life. Julia is a member of the T Party writers' group.
Loading...
or
Not Currently Available for Direct Purchase