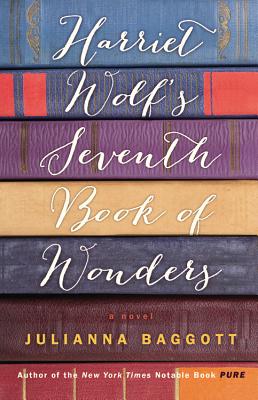 "A mesmerizing tale of star-crossed love and of the dark secrets in a fracturing family . . . This novel is so full of wonders that it leaves you haunted, amazed, and, like every great read, irrevocably changed." -- Caroline Leavitt, New York Times bestselling author of Pictures of You

The reclusive Harriet Wolf, revered author and family matriarch, has a final confession: a love story. Years after her death, as her family comes together one last time, the mystery of Harriet's life hangs in the balance. Does the truth lie in the rumored final book of the series that made Harriet a world-famous writer, or will her final confession be lost forever?

Harriet Wolf's Seventh Book of Wonders tells the moving story of the unforgettable Wolf women in four distinct voices: the mysterious Harriet, who, until now, has never revealed the secrets of her past; her fiery, overprotective daughter, Eleanor; and her two grown granddaughters -- Tilton, the fragile yet exuberant younger sister, who's become a housebound hermit, and Ruth, the older sister, who ran away at sixteen and never looked back.

When Eleanor is hospitalized, Ruth decides it's time to do right by a pact she made with Tilton long ago: to return home and save her sister. Meanwhile, Harriet whispers her true life story to the reader. It's a story that spans the entire twentieth century and is filled with mobsters, outcasts, a lonesome lion, and a home for wayward women. It's also a tribute to her lifelong love of the boy she met at the Maryland School for Feeble-minded Children.

Harriet Wolf's Seventh Book of Wonders, Julianna Baggott's most sweeping and mesmerizing novel yet, offers a profound meditation on motherhood and sisterhood, as well as on the central importance of stories. It is a novel that affords its characters that rare chance we all long for -- the chance to reimagine the stories of our lives while there's still time.

"[Recent] mania for literary treasures provides the perfect moment for Julianna Baggott's new novel, Harriet Wolf's Seventh Book of Wonders. In a daring bit of whimsy, Baggott has imagined what it would be like to have written a phenomenally popular series, a collection of novels that everyone has read....the chapters narrated in Tilton's fairy-like voice are the novel's most interesting and creative. Baggott conveys her fragmentary understanding of what's happening as she responds to the literal meaning of everything anyone says to her. This is easy to get wrong; the risk of mocking a young woman with special needs is high here, but Baggott captures Tilton's oddness and charm with real affection. Hearing her internal voice, we can tell that she enjoys a rich imagination, seeded long ago be her famous grandmother....As a novel about learning to love and forgive, Harriet Wolf's Seventh Book of Wonders offers some sweet moments of reconciliation."—Ron Charles, Washington Post

"Some novels are a lot bigger inside than out. Case in point: Harriet Wolf's Seventh Book of Wonders....[which] signals a quantum leap....It took Baggott eighteen years to write, and that's believable. This sprawling tale covers the entire twentieth century and multiple literary styles. It is not dense, however, and it can be enjoyed by readers who know nothing of deconstruction or semiotics....Readers will be reminded of the work of John Irving (especially Cider House Rules) with touches of F. Scott Fitzgerald....One thing is certain: Nobody will be bored." —Wilmington Star-News

"Julianna Baggott's richly imagined new novel is filled with laughter and heartbreak, and--most wonderfully--with the bright, pained release of stories, which flutter from these pages like living birds."—Elizabeth Graver, author of The End of the Point, long-listed for the 2013 National Book Award

"A narrative that delivers a powerful sense of the meaning of motherhood and the bonds between sisters."—Barbara Hoffert, Library Journal

"Pure is not just the most extraordinary coming-of-age novel I've ever read, it is also a beautiful and savage metaphorical assessment of how all of us live in this present age. This is an important book by one of our finest writers." --Robert Olen Butler, Pulitzer Prize winner