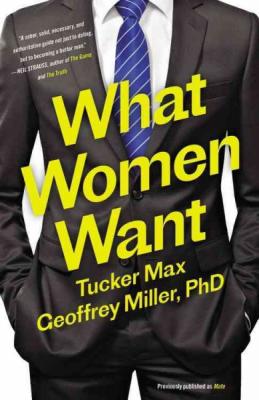 The #1 bestselling pioneer of "fratire" and a leading evolutionary psychologist team up to create the dating book for guys.

Whether they conducted their research in life or in the lab, experts Tucker Max and Dr. Geoffrey Miller have spent the last 20+ years learning what women really want from their men, why they want it, and how men can deliver those qualities.

The short answer: become the best version of yourself possible, then show it off. It sounds simple, but it's not. If it were, Tinder would just be the stuff you use to start a fire. Becoming your best self requires honesty, self-awareness, hard work and a little help.

Through their website and podcasts, Max and Miller have already helped over one million guys take their first steps toward Ms. Right. They have collected all of their findings in Mate, an evidence-driven, seriously funny playbook that will teach you to become a more sexually attractive and romantically successful man, the right way: No "seduction techniques," No moralizing, No bullshit. Just honest, straightforward talk about the most ethical, effective way to pursue the win-win relationships you want with the women who are best for you.

Much of what they've discovered will surprise you, some of it will not, but all of it is important and often misunderstood. So listen up, and stop being stupid!

Geoffrey Miller, Ph.D., is a tenured professor of evolutionary psychology at University of New Mexico, and the author of The Mating Mind and Spent.

Praise For What Women Want…

"Every single page has interesting information. A great resource."
—Dr. Drew Pinsky, host of the Loveline radio show and Dr. Drew On Call on HLN

"The most unexpected book of the year: World-famous evolutionary psychologist meets world-famous drunken asshole. The result: A sober, solid, necessary, and authoritative guide not just to dating, but to becoming a better man."
—Neil Strauss, author of New York Times bestseller The Game and The Truth

"I wish I could teleport a copy of Mate back in time and give it to my 13-year-old self, and then instruct him to read it once a year for the next decade."—Jake Seliger, author and founder of The Story's Story

"From the very beginning, this book plays it straight. It's about becoming a better person and creating positive, fulfilling relationships. This isn't a book with a predatory, pickup artist mindset."
—Aubrey Marcus, founder of Onnit Fitness and the Aubrey Marcus Podcast

"A fascinating look at mating and dating from the perspective of a guy who gained fame for doing the former.... Miller's academic influence gives it some much needed credibility."
—Adam Kovac, AskMen.com
or
Not Currently Available for Direct Purchase
Copyright © 2020 American Booksellers Association