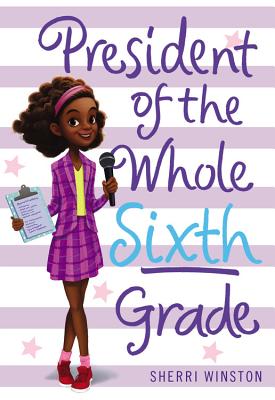 In this follow-up to President of the Whole Fifth Grade, Brianna navigates her toughest challenge yet: middle school!

Brianna Justice is determined to raise enough money for the big class trip to Washington, D.C., but she's up against a lot: classmates who all pretend to be something they're not, a new nemesis determined to run her out of office, and the sinking feeling she's about to lose her two best friends for good. But just when she begins to lose hope, she comes to realize that sometimes surprises can turn out even better than the best-laid plans.

Sherri Winston tells a story brimming with humor and heart as Brianna navigates the ins and outs of middle school, discovering that inspiration can come when you least expect it.

Praise For President of the Whole Sixth Grade (President Series #2)…

Praise for President of the Whole Sixth Grade:

"Winston's humorous prose captures the spirited preteen voice of an honors student with sass, quick wit, and great ideas... A whip-smart, funny, and fast-paced outing equally suited to returning fans and readers who are just meeting Brianna for the first time."—Kirkus Reviews

"Brianna's determination and follow-through make her a great role model, but the true value here is the very real depiction of the ebb and flow of middle-school friendships and the difficulties that come with growing up. An important resource for anyone who's ever been in Brianna's shoes."—Booklist

A Children's Indie Next pick

Praise for Sherri Winston's President of the Whole Fifth Grade:
- "A sweet confection for middle graders... will be a hit with readers who like Wendy Mass and Lauren Myracle." - Booklist