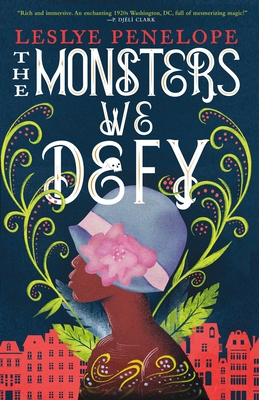 The Monsters We Defy

"Never make a deal with shadows at night, especially ones that know your name.”

Washington D. C., 1925: Clara Johnson can talk to spirits—a gift that saved her during her darkest moments, now a curse that’s left her indebted to the cunning spirit world. So when a powerful spirit offers her an opportunity to gain her freedom, Clara seizes the chance, no questions asked. The task: steal a magical ring from the wealthiest woman in the District.

Clara can’t pull off this daring heist alone. She’ll need the help of an unlikely team, from a handsome jazz musician able to hypnotize with a melody to an aging actor who can change his face, to pull off the impossible. But as they race along DC’s legendary Black Broadway, conflict in the spirit world begins to leak into the human one—an insidious mystery is unfolding, one that could cost Clara her life and change the fate of an entire city.

The Monsters We Defy is a timely and dazzling historical fantasy that weaves together African American folk magic, history, and romance.


Praise For The Monsters We Defy…

"Leslye Penelope has created a rich and immersive world, set in an enchanting 1920s Washington DC full of jazz musicians, elite Black social organizations, fairy balls, bootleggers, lady gangster bosses, and mesmerizing magic! It's a story that weaves together threads of real history with bits of the utterly fantastic. The Monsters We Defy will keep you turning the pages and wanting more!” —P. Djèli Clark, author of A Master of Djinn

"Penelope’s blend of fantasy and history is pitch perfect, with wit, romance, and a lovable found family thrown in for good measure. Readers will be wowed."—Publishers Weekly (starred)

"A gritty heroine and crew that commune with trickster spirits. A heist that pits them against a powerful member of the city's elite. In The Monsters We Defy, Leslye Penelope blends magic, mystery, and mayhem in this deliciously complex historical fantasy."—Veronica Henry, author of Bacchanal

"An enchanting adventure that weaves a spell while spotlighting Black culture in the 1920s."—Justina Ireland, New York Times bestselling author

"Masterfully crafted, with gorgeous prose, colourful characters, and a compelling plot. This smart and entertaining, magical heist novel hits all the right notes and leaves the reader wanting more."—T. L. Huchu, author of The Library of the Dead

"What a thrilling gem of a book! Clara is a heroine for the ages and her 1920s Black Washington society, both the glamour and the grit, is so compellingly evoked it's as though Penelope has given us a peek behind the veil to hear the tales of our ancestors. Highly recommended." —Alaya Dawn Johnson, World Fantasy Award-winning author of Trouble the Saints

"The 1920s have a great deal to say to the 2020s about justice and whose lives are seen as being worth more than others. Stolen destinies, dubious bargains, and unlikely groups of allies, all in a city whose history deserves more fame: this is a fresh and engaging take on historical fantasy!"—Marie Brennan, author of The Lady Trent Memoirs

"The Monsters We Defy is a fascinating blend of the real and imagined...both a well-crafted fantasy romp (with a healthy dose of happily-ever-after romance) and a work of revisionist fiction that elevates a vital, oft-overlooked slice of history." —BookPage

"Brightly painted with hues and shades of magic, set against a backdrop of jazz music and drag balls, Penelope has taken a specific historical place and moment and made them feel vibrantly alive. She expertly weaves threads of folklore, mythology, and Bible stories into the tapestry of the setting, creating a texture that ties the story to this world and its history while allowing the fantastic to breathe and flow."—Paste Magazine

Leslye Penelope has been writing since she could hold a pen and loves getting lost in the worlds in her head. She is an award-winning author of fantasy and paranormal romance. Equally left and right-brained, she studied filmmaking and computer science at Howard University and sometimes dreams in HTML. She hosts the My Imaginary Friends podcast and lives in Maryland with her husband and furry dependents.
Loading...
or support indie stores by buying on