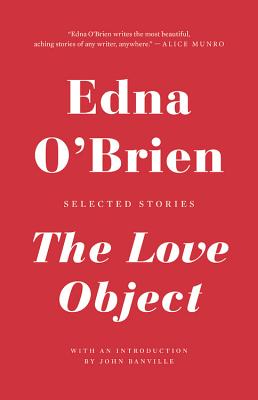 Collected here for the first time are stories spanning five decades of writing by the "short story master" (Harold Bloom).

As John Banville writes in his introduction to The Love Object, Edna O'Brien "is, simply, one of the finest writers of our time." The thirty-one stories collected in this volume provide, among other things, a cumulative portrait of Ireland, seen from within and without.

Coming of age, the impact of class, and familial and romantic love are the prevalent motifs, along with the instinct toward escape and subsequent nostalgia for home. Some of the stories are linked and some carry O'Brien's distinct sense of the comical. In "A Rose in the Heart of New York," the single-mindedness of love dramatically derails the relationship between a girl and her mother, while in "Sister Imelda" and "The Creature" the strong ties between teacher and student and mother and son are ultimately broken. "The Love Object" recounts a passionate affair between the narrator and her older lover.

The magnificent, mid-career title story from Lantern Slides portrays a Dublin dinner party that takes on the lives and loves of all the guests. More recent stories include "Shovel Kings" -- "a masterpiece of compression, distilling the pain of a lost, exiled generation" (Sunday Times) -- and "Old Wounds," which follows the revival and demise of the friendship between two elderly cousins.

In 2011, Edna O'Brien's gifts were acknowledged with the most prestigious international award for the story, the Frank O'Connor Short Story Award. The Love Object illustrates a career's worth of shimmering, potent prose from a writer of great courage, vision, and heart.

"The most striking aspect of Edna O'Brien's short stories, aside from the consistent mastery with which they are executed, is their diversity."-John Banville

"When a writer as gifted as O'Brien memorializes a vanishing world, we experience not only the 'lost landscape' but the richly ambivalent emotions it has evoked."—Joyce Carol Oates, Times Literary Supplement

"Every one of the stories included is a shining example of a master at work."—Lucy Scholes, Observer

As well as being an intensely enjoyable book, it is a very important publication in the history of Irish literature: the selected stories of one of the major writers of our era."—Eilis Ni Dhuibhne, Irish Times

"A career's selection of stories to savor.... Hers is not the sort of writing that indulges in what one story dismisses as 'clever words and hollow feelings'; her stories ask impossibly difficult questions about the nature of love and the possibility of happiness, and they refuse to settle for easy answers.... This collection positions O'Brien among the literary heavyweights, where it confirms she belongs."—Kirkus Reviews (starred review)

"O'Brien is an Irish natural treasure, having secured a place in the pantheon of top-notch twentieth-century Irish writers of fiction.... What we see now is what was always there, brilliant prose couched in extremely creative and greatly relevant story lines presenting well-understood and broadly understandable characters.... O'Brien succeeds with genius-level ingenuity in producing short stories achingly effective."—Brad Hooper, Booklist (starred review)

"A cause for celebration."—Jane Ciabattari, BBC

"In this landmark collection of short fiction, Irish master Edna O'Brien gorgeously explores the complexities of her characters and the land that engendered them."—Cathleen Medwick, More

"When O'Brien ranges farther into the lives of women and men, married and single, beyond the borders of Ireland, she describes longing and desire and the intricacies of love and adultery as keenly and memorably as any modern writer you'll read.... The lyrical turnings of her quest for truth, the deftness of her sentences and the clinical eye she turns on the imprisoning values of her country hark back to Joyce, modern Ireland's old artificer. All together, they make O'Brien the first female bard of the place she bitterly names as 'a land of shame, a land of murder, and a land of sacrificial women.' O'Brien's 84 now, and eventually she herself will be gone. But her stories will linger - not just smoldering, but burning as fiercely as when they first appeared."—Alan Cheuse, NPR

"The confidence and authority of Ms. O'Brien's writing, and the humor and sexiness that flow through it, mark her as a figure at the top of the food chain. The Love Object...consolidates this position. It's a book of deep and complicated and sometimes rude pleasures.... It's tempting to remark that sex and class and vanity and disappointment are Ms. O'Brien's central themes, but that's a hollow statement - those are all of our themes, mine at least, and probably yours, too. What matters is how consistently observant she is about them, how her sentences ring and ring again. There are echoes of James Joyce's stories and of William Trevor's, but the sound is unmistakably her own."—Dwight Garner, New York Times

"The Love Object is less a catalog than a kind of humanist Rosary-and each bead, each story, is a prayer, a meditation, a supplication, a lament, a confession. We rub the hard beads between soft fingers, not as a gesture of intellectual decoding, but as an act of sensing, feeling our way into O'Brien's created lives, the mysteries of common human experience, where the everyday is profound and gently affecting, and the profane becomes sacred."—Earl Pike, Cleveland Plain Dealer

"Brilliant and memorable.... There is a harmony among all these stories that makes a whole."

"Put on a pot of tea and curl up with The Love Object, the new collection of Edna O'Brien stories. If you're lucky, it'll be cold, damp and misty outside.... The Irish writer John Banville calls O'Brien 'the poet of vulnerability,' and while it's true that many of her characters are wounded, reading about them is often exhilarating because of her prodigious ability to capture both the beauty and the sorrows of the world."—Associated Press

"O'Brien writes like an angel.... There's a hint of William Trevor's Irish grimness in the background to these stories, a touch of Flann O'Brien's Irish madness, and more than a bit of Virginia Woolf's sensitivity to the stream of women's consciousness.... The Love Object demonstrates just how good Edna O'Brien is."—Joseph Bottum, Washington Free Beacon

"The Love Object is more than a short-story collection, it's an encyclopedia of perfect storytelling and a retrospective on the fifty-year career of a writer of exquisite finesse and pathos.... O'Brien has taken a great deal of time over these small works of art. They are finely wrought pieces with vivid details, sparingly rendered. The sentences are buffed to a polish, the symbolic images (a green georgette evening gown, a mossy cave, an undercooked fowl) so finely worked, their seams are invisible."—Jennifer Wilder, BookBrowse

"O'Brien's reputation as one of the greatest storytellers in modern literature is only strengthened by this volume's publication."—John G. Matthews, Library Journal

"Read a bunch of stories by the same writer, and you come away with a portrait of a mind in mosaic-if she's not much good, the cracks will soon show; if she is, you're privy to something exquisite. The latter is the case with The Love Object.... O'Brien's mastery reveals itself in any number of ways."—Alexandra Schwartz, New Yorker

"Doyenne or jezebel, Ireland's Edna O'Brien is a master.... The Love Object presents us with the very finest of her short stories-31 examples of her shimmering prose, spanning her career. Presented together in one volume, the end result is a staggering achievement: a masterclass in the form, each story a perfectly polished work of art, complete and fully realized on a miniature scale.... One of the wonderful things about The Love Object is how one can trace the developments in O'Brien's career through its pages, watching the subtle shift between these earlier narratives of female experience and her later work that addresses the broader issues of Irish history and politics."—Lucy Scholes, Daily Beast

"Fire-warmed Chekhovian realist fictions (though they are slyly experimental), which run the gamut from stories of class and romance to cautionary tales of sex and madness."—Jonathan Sturgeon, Flavorwire

"Honest, daring, thoughtful, eloquent, restless.... The Love Object was bound to be brilliant-these stories are for the most part known and loved. But reading them all together engages us in a lengthy, thoughtful dialogue between a brilliant mind and an interesting world. Not to be missed."—Jane Smiley, Philadelphia Inquirer