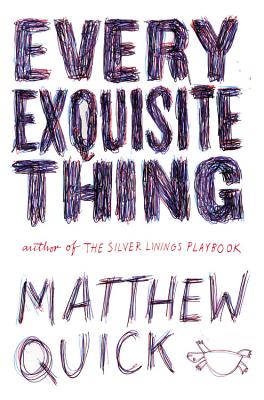 Nanette O'Hare is an unassuming teen who has played the role of dutiful daughter, hardworking student, and star athlete for as long as she can remember. But when a beloved teacher gives her his worn copy of The Bubblegum Reaper--a mysterious, out-of-print cult classic--the rebel within Nanette awakens.

As she befriends the reclusive author, falls in love with a young but troubled poet, and attempts to insert her true self into the world with wild abandon, Nanette learns the hard way that rebellion sometimes comes at a high price.

A celebration of the self and the formidable power of story, Every Exquisite Thing is Matthew Quick at his finest.

Praise For Every Exquisite Thing…

"Every Exquisite Thing lives up to the hype...You're going to wish you could follow Quick's awesome heroine Nanette for another 500 pages or so when you get to the end."—Bustle.com

* "The author's beautifully written first-person narrative captures the thoughts and feelings of a sensitive eighteen-year-old girl struggling against the shallowness she sees around her....All of the elements of this novel work together to make this an outstanding coming-of-age story."—VOYA, starred review

* "Quick continues to excel at writing thought-provoking stories about nonconformity.... [and] paints a compelling portrait of a sympathetic teenager going through the trial-and-error process of growing up."—Publishers Weekly, starred review

* "Like the many anticonformity books before it, this will find a dedicated audience among teen readers."—School Library Journal, starred review

"Quick's story will speak to teenage eccentrics: loners, rebels, and creative types; the kind to follow Booker's suggestions to read Bukowski and Neruda; those ripe for transformation."—Horn Book

"Quick creates beautifully well-rounded characters, particularly Nanette, whose first-person narrative, rich with wry observations and a kaleidoscope of meaningful emotions, offers great insight into the mind of a teen on a sometimes sluggish, spiraling path toward sorting herself out."—Booklist

"[Quick] will give readers lots to chew on as they join Nanette in sorting out angst from general privileged malaise."—The Bulletin of the Center for Children's Books

Matthew Quick (aka Q) is the New York Times bestselling author of The Silver Linings Playbook, The Good Luck of Right Now, and three young adult novels, Sorta Like a Rock Star, Boy21, and Forgive Me, Leonard Peacock. His work has been translated into thirty languages, and has received a PEN/Hemingway Award Honorable Mention. The Weinstein Company and David O. Russell adapted The Silver Linings Playbook into an Academy Award winning film. Q lives in North Carolina with his wife, novelist/pianist Alicia Besette. His website is matthewquickwriter.com.

1. Do you consider yourself an extrovert or an introvert? How does the way you interact with the world color your opinion of Nanette?

2. Reading The Bubblegum Reaper quite literally changes Nanette’s life. Have you ever had a similar reading experience? What books have forced you to reexamine your belief system?

3. What are the major themes of The Bubblegum Reaper?

5. With which Every Exquisite Thing character do you most identify? Why?

7. From firsthand experience, Mr. Graves knows how profoundly The Bubblegum Reaper can challenge young people. Why does he give his copy to Nanette?

8. Compare and contrast The Bubblegum Reaper’s effects on Alex and Nanette.

11. Since Booker has “quit” publishing, it’s tempting to label him a reclusive author, and yet he seems eager to befriend young people, even opening up his home to them. He also seems quite eager to talk about literature. Booker no longer wants to publish. What does he want?

12. When Nanette begins to speak in third person and attempts to be the young woman she thinks her community wants, she is able to deceive many of her classmates, including Ned, who falls in love with a “fake version” of her. Think about Ned and Nanette’s relationship. Who is in the right and who is in the wrong? Provide examples.

13. Is it important for every single member of a class to attend proms and graduation ceremonies regardless of whether each individual enjoys such group activities? Why or why not? What percentage of students needs to benefit from participation in order to justify perpetuating those traditions?

14. Have you ever met anyone like Nanette? What was your opinion of that person?

15. Does success stem from following or breaking societal rules?

16. What do you think will happen to Nanette in the future?