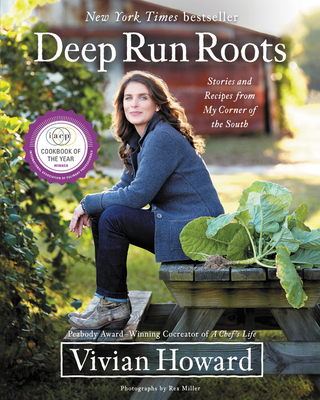 Stories and Recipes from My Corner of the South

Vivian Howard, star of PBS's A Chef's Life, celebrates the flavors of North Carolina's coastal plain in more than 200 recipes and stories.

This new classic of American country cooking proves that the food of Deep Run, North Carolina -- Vivian's home -- is as rich as any culinary tradition in the world. Organized by ingredient with dishes suited to every skill level, from beginners to confident cooks, Deep Run Roots features time-honored simple preparations alongside extraordinary meals from her acclaimed restaurant Chef and the Farmer. Home cooks will find photographs for every single recipe.

Ten years ago, Vivian opened Chef and the Farmer and put the nearby town of Kinston on the culinary map. But in a town paralyzed by recession, she couldn't hop on every new culinary trend. Instead, she focused on rural development: If you grew it, she'd buy it. Inundated by local sweet potatoes, blueberries, shrimp, pork, and beans, Vivian learned to cook the way generations of Southerners before her had, relying on resourcefulness, creativity, and the traditional ways of preserving food.

Deep Run Roots is the result of years of effort to discover the riches of Eastern North Carolina. Like The Fannie Farmer Cookbook, The Art of Simple Food, and The Taste of Country Cooking before it, this is landmark work of American food writing.

Praise For Deep Run Roots: Stories and Recipes from My Corner of the South…

"This is an epic work of art.... It is stunning. It is so beautiful. And what I love best about this book is the storytelling. It's such a vivid work."—Rachael Ray

"The book reads like a memoir, with lengthy and lush descriptions of Howard's hometown thoughts...I was prepared to pick this book based on the story... alone.... Certifiably delicious... [and] Howard's voice is folksy and endearing, and I loved her stories about her family and the Piggly Wiggly-and I wanted very badly for her to be cooking instead of me.... Gorgeously photographed, with [an] encouraging, warm voice, and scores of enticing recipes."—Emma Straub, Food52

"My favorite cookbook of the season--the one doomed to the most splatters--is Vivian Howard's Deep Run Roots... Howard cooks with what can only be called wit... but also magnificent heart.... [It] will keep your soul fed for weeks."—Jonathan Miles, Garden & Gun

"[One of] our favorite new cookbooks... Vivian Howard overdelivers on the comfort food of her Southern home with drippy, crunchy, tangy dishes for every season."—Food and Wine

"Chef and television star Vivian Howard can now add cookbook author to her impressive resume. Deep Run Roots focuses on her brand of Southern food and country cooking, both from her home and from her acclaimed Kinston, NC restaurant, Chef and the Farmer. These are compelling recipes, like fried yams paired with five-spice maple bacon and fried okra updated with a tempura batter. There are over 200 recipes and, remarkably, each has a photo."—Hillary Dixler, Eater

"The first lady of Carolina cooking.... Howard has been restoring Kinston's soul."—Saveur

"You won't find a fried chicken recipe anywhere in [Deep Run Roots'] 570 pages...Vivian has the opportunity to redefine the cuisine of her region."—Vice Munchies

"Sandwiched amid the fine culinary writing are many delicious recipes... Howard is happily unafraid to offer her readers shortcuts, such as already-shelled raw peanuts or Uncle Ben's rice.... For 10 years, [Vivian's] honesty and authenticity have been on display at her restaurants and on TV. Her new book shows them off, too."—The Washington Post

"In this outstanding debut... fans of Southern cooking will find plenty of catfish, corn cakes, cast-iron skillet dishes, and cooking-with-Grandma stories--but it's not all biscuits and gravy... Going beyond the glories of grits, Howard's text is storytelling at its best, rich in mouthwatering detail and reminiscences... This tribute to her family roots is destined to become an enduring classic."—Publishers Weekly (starred review)

"It's rare that reminiscences and recipes mix holistically in one book. Remember, though, that . . . Howard hails from North Carolina, where a penchant for storytelling is in everyone's DNA. . . . A must-read compendium of wisdom."—Booklist (starred review)

"An intriguing story of reconnecting with family and rediscovering ingredients such as turnips, tomatoes, sweet potatoes, peaches, and collards. Home cooks of all skill levels will devour Howard's recipes...whose appeal goes far beyond that of typical Southern fare. A standout collection of regional Southern foods, both simple and restaurant-worthy."—Library Journal

"The Southern chef and A Chef's Life star gives you a reason to love eastern North Carolina. More than 200 reasons, in fact, including fried yams with five-spice maple bacon candy and cucumber crab dip. Each recipe shows just how tuned in Howard is to Southern cuisine traditions, and her stories will leave you homesick--wherever you're from."—Tasting Table

"Vivian Howard can write as well as she cooks... [with] endearing, revealing honesty... it's the writing in the book that should be the real star of the show-a book entirely written by a working chef, mother, and TV star all without the help of a ghost writer."—Charleston City Paper

"With a straight-forward, personal tone, it's hard not to come away charmed as well as enlightened."—The Charlotte News & Observer

"Howard likes to keep the focus on the farmers and the 'unsung heroes' of Southern food... [and] ties her food and her roots in North Carolina together.... Howard is looking toward new culinary horizons."—Lexington Herald-Leader

"She's been doing something right.... Howard's ability to make us identify with the person behind the chef's apron makes her vision of exploring the South one ingredient at a time a vital one."—Nashville Scene

"Lucky for us, [Vivian's] decided to share the experience of growing up in a Southern farm community via passed-down tales and crowd-pleasing recipes."—Modern Farmer

"In Deep Run Roots... [Howard] introduces readers to the foods of her world, explaining butter beans and calling cheesy grit fritters the Southern brother to arancini while giving insight into the difference between turnip eaters and collard eaters. It's regional and Southern, with a thoughtful approach elevated by ingredients and technique."—Milwaukee Journal-Sentinel

"[Deep Run Roots] is no ordinary cookbook.... The reader who finishes these chapters about foods will also have read Vivian Howard's memoir."—Richmond County Daily Journal

"There are more than 200 recipes and they appeal to anyone with an interest in cooking."—Savannah Morning News

"Clocking in at 576 pages, with 200 recipes organized by ingredients that define the region around her hometown of Deep Run, NC, Deep Run Roots is a deliciously ambitious volume that doubles as biography and cookbook... Howard gives us a feel for who she is."—Wendell Brock, The Atlanta Journal-Constitution

"There are recipes for every meal and occasion--for beginners to more experienced cooks--and plenty of practical tips... it's truly a year-round resource."—Try Small Things

"Readers will enjoy Howard's clever, warm writing as much as her recipes."—The Advocate

"Award-winning chef and PBS show host Vivian Howard's new cookbook is a deep dive into Southern food. Rather than publishing a few well-known recipes from this region and that, Howard focuses on the ingredients and techniques that have sustained her native North Carolina for generations. Get your hands on this hefty tome and prepare to see the Tar Heel State as never before."—Food Republic

"Vivian Howard offers a tome for cooking in the New South-a place where myriad cultures and a modern sensibility build on a rich culinary tradition.... This is big picture South."—Star Chefs

"Howard's book is a big, gorgeous example of an approach to food that gets to the heart of the recent love-fest for southern cooking. Farm to table is the real deal here, and Howard organized Deep Run Roots the way she determined the menu for her restaurant, Chef and the Farmer-by ingredient-in order to focus on what is fresh and local throughout the year."—Omnivoracious

Vivian Howard is the chef and owner of the acclaimed Chef and the Farmer restaurant in Kinston, North Carolina, fifteen miles from her home of Deep Run. She trained under Wylie Dufresne and Sam Mason at WD-50 and was a member of the opening team at Jean-Georges Vongerichten's Spice Market in New York. The first woman since Julia Child to win a Peabody Award for a cooking program, she co-created and stars in the PBS series A Chef's Life.
Loading...
or support indie stores by buying on