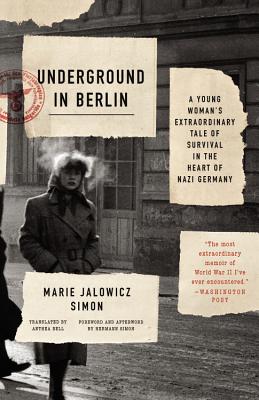 "Captivating....Jalowicz's story is unquestionably tragic in so many ways, but is also full of miracles, hope, and a future."
—Publishers Weekly (Starred review)

Marie Jalowicz Simon was born in 1922 into a middle-class Jewish family. She escaped the ghettos and concentration camps during the Second World War by hiding in Berlin. After the war she was full professor of the literary cultural history of classical antiquity at the Berlin Humboldt University. Shortly before her death, her son, Hermann Simon, director of the New Synagogue Berlin Foundation-Centrum Judaicum, recorded Marie telling her story. He acts as a spokesperson for Underground in Berlin.
or
Not Currently Available for Direct Purchase