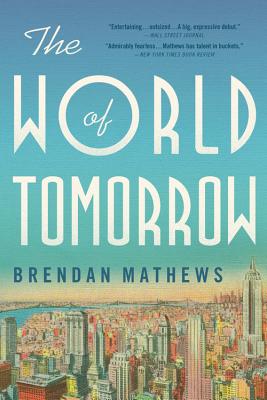 The World of Tomorrow

June 1939. Francis Dempsey and his shell-shocked brother, Michael, are on an ocean liner from Ireland bound for their brother Martin's home in New York City, having stolen a small fortune from the IRA. During the week that follows, the lives of these three brothers collide spectacularly with big-band jazz musicians, a talented but fragile heiress, a Jewish street photographer facing a return to Nazi-occupied Prague, a vengeful mob boss, and the ghosts of their own family's revolutionary past.

When Tom Cronin, an erstwhile assassin forced into one last job, tracks the brothers down, their lives begin to fracture. Francis must surrender to blackmail or have his family suffer fatal consequences. Michael, lost and wandering alone, turns to Lilly Bloch, a heartsick artist, to recover his decimated memory. And Martin and his wife, Rosemary, try to salvage their marriage and, ultimately, the lives of the other Dempseys. Meanwhile, with the Depression receding, all of New York is suffused with an electric feeling of hope, caught up in the fervor of the World's Fair and eager for good times after a decade of deprivation.

From the smoky jazz joints of Harlem to the opulent Plaza Hotel, from the garrets of vagabonds and artists in the Bowery to the backroom warrens and shadowy warehouses of mobsters in Hell's Kitchen, Brendan Mathews brings the prewar metropolis to vivid, pulsing life. The sweeping, intricate, and ambitious storytelling throughout this remarkable debut reveals an America that blithely hoped it could avoid another catastrophic war and focus instead on the promise of the World's Fair: a peaceful, prosperous "World of Tomorrow."

"As rich and raucous as the city it celebrates."-O., The Oprah Magazine

Praise For The World of Tomorrow…

Advance praise for The World of Tomorrow:
"Entertaining . . . outsized . . . The World of Tomorrow views its teeming cast of characters as though from the observation deck of one of the city skyscrapers that seem to 'burst from the pages of a comic book.' . . . Reveling in bold twists and fantastic coincidences, Mathews's big, expressive debut inhabits a world that's neither of the past nor the future but wholly of the imagination."—Sam Sacks, Wall Street Journal

"This Doctorow-esque debut novel shimmers with the swing and
swank of 1939 New York . . . Mathews's urban epic is as rich and raucous as the
city it celebrates."—O., The Oprah Magazine

"Mathews has a big, rambunctious talent . . . He is a wonderful scene-setter, whether he's describing the streets of Manhattan in the wee hours or conjuring the glories of then brand-new Rockefeller Center . . . The gusto of his prose and vividness of his characters keeps the novel gyrating with zany energy . . . An exuberant debut novel."—Michael Upchurch, Chicago Tribune

"The World of Tomorrow is that rarest of historical novels, a book that catches a moment in a jar, holds it aloft, and displays it for what it really is: Somebody else's day before tomorrow, the instant right before the future comes . . . Mathews's entire novel takes place over the course of one week in June of that year, culminating at the World's Fair itself, in a fast-paced finale worthy of a Scorcese long-take. And I love this about the book. I love the bright-eyed joy of it. The meticulous attention to detail that actually serves the plot . . . And I like that Mathews made this big book so intimate . . . One of the strengths of his story is the way it sprawls and loops. It finds odd little corners of time and place and character to get into and, in those corners, it finds both a balancing seriousness and a wideness of vision."—Jason Sheehan, NPR

"A promising writer . . . Mathews is an able prose stylist, and breathing life into so many diverse characters is no mean feat . . . The possibility of dramatic transformation amid historical ferment is at the heart of The World of Tomorrow, a fat novel stuffed with well-drawn characters grappling with different versions of themselves . . . Mathews has a flair for bringing street scenes to life, and his hopscotching narrative-from a Harlem jazz joint to a Bowery art studio to a Fifth Avenue palace-makes for an enjoyable tour of a vanished city . . . An affable debut novel."—John Freeman Gill, Washington Post

"This is one of those books that you jump into with its first line, like a diver into an inviting pond, and just happily swim for more than 500 pages . . . Mathews creates a crowded, bustling world that's insanely fun to inhabit. I didn't want this book to end . . . Just read it already."—Moira Macdonald, Seattle Times

"A madcap rollick tinged with a touch of menace, The World of Tomorrow delights in sending its characters pinging around pre-World War II New York, on the run from Irish gangsters, fascist regimes, and crazy relatives . . . Mathews's breezy epic captures a hustling spirit soon to be subsumed by a world at war . . . A dazzling literary debut."—Chris Vognar, Dallas Morning News

"The World of Tomorrow is a big American novel, filled with ordinary people on the verge of extraordinary changes. By week's end, each will have made a pivotal choice whose consequences ripple far beyond their own lives . . . As with many novels that feel quintessentially American, immigrants and refugees are lead characters . . . This is Mathews's first novel, but you would not know it from the depth of its characters or the tight-as-a-snare-drum pacing. He connects multiple narratives in gratifying and often surprising ways, which makes this nearly 600-page story fly by faster than many books half its size . . . Mathews infuses The World of Tomorrow with the sights, sounds, and smells of 1930s New York: the energy of the dancers in Harlem's Savoy Ballroom when the band is running hot; the island-unto-itself nature of a Park Avenue mansion; the savory delicacies from a pushcart on a crowded Bowery street . . . Mathews takes exquisite care in creating even marginal characters and locales . . . [He gives] a sense of an entire neighborhood in a few phrases . . . It's rare to read a book whose range and ambition so aptly fit its title. Page after page, The World of Tomorrow lives up to its notable name."—Carol Iaciofano, WBUR

"Mathews writes extraordinarily well . . . His plot, rife with geopolitical intrigue, is nicely calibrated . . . His characters are likable and clever . . . They're Depression-weary, ready to transcend 'the sordid history of the Old World and looking boldly to the future.' This is an expansive theme, and from it, the first-time author has carved a commendable novel."—Kevin Canfield, Minneapolis Star Tribune

"Mathews deftly handles a large cast of characters in The World of Tomorrow . . . Perhaps the most vibrant character of all, however, is New York itself. In hard-boiled prose that ranges from gossipy to poetic, Mathews takes us from humble Bronx homes to rowdy Manhattan jazz clubs, from grimy back alleys to palatial Fifth Avenue estates . . . The World of Tomorrow is a sweeping, impressive accomplishment . . . Mathews has written an insightful immigrant epic, not to mention a first-class literary thriller."—Tom Deignan, BookPage

"What a beguiling debut Brendan Mathews has given us in The World of Tomorrow: clever, smart, ambitious, richly textured, and moving."
—Richard Russo, Pulitzer Prize-winning and New York Times bestselling author of Everybody's Fool

"Brash, bold, completely entertaining, and dazzling in its evocation of time and place, Brendan Mathews's splendid debut offers pleasures on every page."
—Andrea Barrett, National Book Award-winning author of The Air We Breathe and Ship Fever

"What a book! The World of Tomorrow is a panoramic tour-de-force, a huge undertaking peopled with convincing characters and animated by a persuasive historical accuracy. But beyond all that, my fascination was with the way Mathews assembled the novel, sifting and endlessly resifting his characters like sand, as life itself piled up right in front of me. The grim realities of America on the cusp of a second World War will be recognizable, but in this capable writer's hands, the individual characters-passionate, secretive, naïve, lucky, unlucky, and sometimes hapless-remain full of surprises to the last. They exist not against the backdrop of history, but tangled up in its complex, cruel, or absurd demands, desperate to find whatever space is allowed them for intimacy."—Ann Beattie, PEN/Malamud-winning author of The New Yorker Stories

"In this sweeping book of slippery secret identities, Brendan Mathews invites us to sink deeply into the hearts and minds of a score of colorful characters. Magically constructed and methodically researched, The World of Tomorrow is a vastly entertaining novel about the powerful pull of family, the weight of history, and the allure of escaping into a better life-all set against a vivid and unforgettable New York."—Eleanor Henderson, New York Times bestselling author of Ten Thousand Saints

"Masterful....This novel is a remarkably fast and exhilarating read, reminiscent of Michael Chabon's The Amazing Adventures of Kavalier & Clay....With the wit of a '30s screwball comedy and the depth of a thoroughly researched historical novel, this one grabs the reader from the beginning to its suspenseful climax."
—Publishers Weekly (Starred Review)

"Mathews's first novel is all you could want in a piece of popular fiction. The tension never lets up, and the story is fast and mind-spinningly complicated....There's suspense, humor, love, of both the doomed and requited varieties....This novel should prove irresistible to anyone wanting a diverting read. It's quality stuff--and fun."

"As everything rolls toward an adrenaline-fueled finale, Mathews
brilliantly creates characters who embody the esprit de corps of immigrants and
movingly explores themes of class, society, race, and family. For fans of
Michael Chabon and E. L. Doctorow."—Bill Kelly, Booklist, starred review

"Mathews' colorful debut novel examines the
legacy of Irish political violence for a family in both the old country and New
York during one busy week in 1939.... Among the many splashes of New York
atmosphere, the strongest are snapshots of the city's prewar musical frenzy....
Mathews' debut shows impressive control
of this narrative cornucopia."—Kirkus Reviews, starred review

Brendan Mathews, a Fulbright Scholar to Ireland, has published stories in Glimmer Train, the Virginia Quarterly Review, and the Cincinnati Review, among other publications, and his fiction has twice appeared in The Best American Short Stories. He lives with his wife and four children in Lenox, Massachusetts, and teaches at Bard College at Simon's Rock.
Loading...
or
Not Currently Available for Direct Purchase