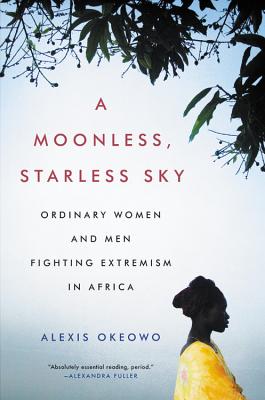 "A rich and urgently necessary book" (New York Times Book Review), A Moonless, Starless Sky is a masterful, humane work of journalism by Alexis Okeowo--a vivid narrative of Africans who are courageously resisting their continent's wave of fundamentalism.

In A Moonless, Starless Sky Okeowo weaves together four narratives that form a powerful tapestry of modern Africa: a young couple, kidnap victims of Joseph Kony's LRA; a Mauritanian waging a lonely campaign against modern-day slavery; a women's basketball team flourishing amid war-torn Somalia; and a vigilante who takes up arms against the extremist group Boko Haram. This debut book by one of America's most acclaimed young journalists illuminates the inner lives of ordinary people doing the extraordinary--lives that are too often hidden, underreported, or ignored by the rest of the world.

"Finally, finally,
finally--a humane, skillful storyteller with sound reporting instincts has
dug into the middle of the stories we think we've already heard out of Africa.
Alexis Okeowo can write prose as arresting as Ryszard Kapuscinski's, she's got
Katherine Boo's big heart, but she has her own fresh way of approaching the
work, one that is terribly overdue. Absolutely essential reading, period."—Alexandra Fuller,New York Times bestselling author of Don't Let's Go to the Dogs Tonight and QuietUntil the Thaw

"From an
abolitionist who once owned a slave to women basketball players in a war zone,
Alexis Okeowo has an alert and thoughtful eye for the unexpected. The portraits
and voices she brings us from Africa are so vivid that the reader can easily
forget the determination and bravery it must have taken to gather them in these
unhappy corners of the continent."—Adam Hochschild,New York Times bestselling author of King Leopold's Ghost and Spainin Our Hearts

"In A Moonless, Starless Sky, Alexis Okeowo has wandered as a reporter into some of Africa's most difficult and dangerous corners and delivered something remarkable: real characters, women and men, fully rendered."—Howard W. French,author of Everything Under the Heavens

"Spectacular reporting.
Full of fresh, unexpected detail. If you want to get an immediate sense of the
lives, both quotidian and extraordinary, of Africans in some of the continent's
most troubled countries, read Alexis Okeowo's book."—William Finnegan,Pulitzer Prize-winning author of Barbarian Days

"Remarkable.... Okeowo writes with beauty and grace....
Refreshingly, she does not give in to easy answers.... Clear-eyed, lyrical,
observant, and compassionate--reportage at its finest."—Kirkus (starred review)

"Alexis Okeowo has
gone to the hardest continent and come away with a series of tales about the
fight against fanaticism and despair. The result is a deeply sensitive portrait
of modern Africa and a microscope on the human condition in the most difficult circumstances."—Dexter Filkins,Pulitzer-Prize winning author of The Forever War

"Alexis Okeowo's
startling and brilliant account of fierce horrors and tender hopes is one of
the best records I have ever read of a world that has been made and remade time
and again out of struggle and faith. Okeowo is just the kind of reporter we
need to hear from when it comes to Africa, the 'new' old world: truthful,
accurate, deep."—Hilton Als,Pulitzer-Prize winning author of White Girls

"A Moonless, Starless Sky is a captivating look at the on-the-ground effects of extremist groups and the people who live their lives in spite of them."—Booklist

"Okeowo's compelling prose is lean but
empathetic, reportorial and personal both in an individual and cultural sense;
her own status as a biological African born in America who straddles two
continents and two sensibilities--at minimum--infuses this work with a real
urgency.... Okeowo's message to readers, and the lesson she unsentimentally
gleans for herself, is that even under a forbidding sky--one without the
radiance of moon or stars-there is always enough light to navigate out of the
darkness toward a better world."—Ms. Magazine

"Through four distinct stories, she shares the stories of
citizens as they resist groups like Lord's Resistance Army and Boko Haram,
while also attempting to bravely move forward with their personal lives. The
reporting is expert and empathetic, and Okeowo illuminates the people beyond
the headlines."—W magazine

"Alexis Okeowo humanizes the lives behind the headlines, transforming often one-dimensional news stories from the African continent into narratives of endurance and survival.... These are narratives of everyday people confronting unimaginable challenges where one's very existence becomes an act of resistance. Okeowo's reporting demonstrates the multiplicity of human resilience and regeneration in impossible times. In a time when our own leaders conflate poverty with personal character, we can think of no more important book. The individuals showcased in A Moonless, Starless Sky are among the best and brightest anywhere in the world."—Prize citation for the 2018 PEN Open Book Award

Alexis Okeowo is a staff writer for the New Yorker and a fellow at New America. Her work has appeared in the New Yorker, the New York Times Magazine, the Financial Times, Time, and Fortune, among many other publications. The daughter of immigrant parents, Okeowo grew up in Alabama and attended Princeton University. She was based in Lagos, Nigeria, from 2012 to 2015, and now lives in Brooklyn.