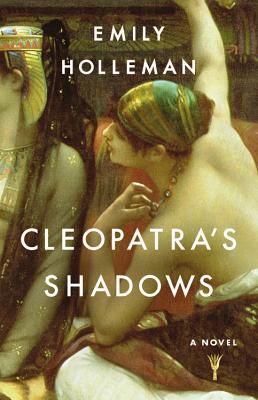 Page-turning historical fiction that reimagines the beginnings of Cleopatra's epic saga through the eyes of her younger sister.

Before Caesar and the carpet, before Antony and Actium, before Octavian and the asp, there was Arsinoe.

Abandoned by her beloved Cleopatra and an indifferent father, young Arsinoe must fight for her survival in the bloodthirsty royal court when her half-sister Berenice seizes Egypt's throne. Even as the quick-witted girl wins Berenice's favor, a new specter haunts her days-dark dreams that have a habit of coming true.

To survive, she escapes the palace for the war-torn streets of Alexandria. Meanwhile, Berenice confronts her own demons as she fights to maintain power. When their deposed father Ptolemy marches on the city with a Roman army, both daughters must decide where their allegiances truly lie, and Arsinoe grapples with the truth, that the only way to survive her dynasty is to rule it.

Praise For Cleopatra's Shadows (A Fall of Egypt Novel)…

"We forget that Cleopatra was a Macedonian, her royal house a relic of the career of Alexander the Great. Where Cleopatra went to bed with Rome, her half-sister Berenice, at nineteen, tried to hold the Egyptian throne against it, while her sister Arsinoe, still a child, fought to hang on in the margins. Prophetic dreams, fraying family bonds, and desperate development of strength in crisis define this affecting work of historical fiction."
—Zachary Mason, author of The Lost Books of the Odyssey

"A colorful tale full of the sights and smells of ancient Egypt, with palace intrigues populated by eunuchs, learned tutors, and slaves of every stripe."
—Enid Shomer, author of The Twelve Rooms of the Nile

"Holleman richly resuscitates this ancient world of danger, illuminating the lives of the women of one extraordinary lineage and their audacious, overt scrambles towards power."
—Kara Cooney, author of The Woman Who Would Be King: Hatshepsut's Rise to Power in Ancient Egypt

"The rich, exotic world created by Emily Holleman in her debut novel,CLEOPATRA'S SHADOWS, is mesmerizing. Intrigue, betrayal and the near-destruction of a dynasty follow in the footsteps of Cleopatra's little-known, but ambitious sisters, Arsinoe and Berenice. A perfect marriage of dedicated research and passionately inventive story telling."—Kathleen Kent, author of The Outcasts

"These characters lived and breathed their lives beyond the page and I could feel them in the room with me. Evocative, immersive and engrossing. I truly loved it."
—Elizabeth Chadwick, author of The Summer Queen

"Readers will sympathize with Berenice as she battles formidable odds.... Holleman succeeds in teasing vivid throughlines from an incredibly complex period.... Her language, anachronism-free, artfully captures the matrix of myth and epic which nurtures and inspires her characters. A high-stakes family drama."
—Kirkus Reviews

"Women have, throughout history, been secondary-often recorded (if at all) as complementary, or as muse to man's genius. But now, as modern societies are re-appraising the value of women, so too are books evolving to match. Readers are pulled into worlds previously closed off-full of tenacity, adventure, and scandal-page-turning, yes, but real.Cleopatra's Shadows reimagines Cleopatra's history through the perspective of her younger sister Arsinoe. We want these stories more than ever."—Meredith Turits, Vanity Fair

"An outstanding debut novel.... Some writers seem destined to unearth the truth of a time and a place and a set of people: Mary Renault and Alexander, Hilary Mantel and Thomas Cromwell and now Emily Holleman and the last generation of Ptolemies. The vivacity, the verve, the sense of bone deep truth of the writing-all are superb. There's a freshness to the prose that is truly captivating, and a dynamism to the narrative that gives life to the people whose names are otherwise a footnote in history."
—Manda Scott, author of The Crystal Skull

"Breathing new life into these historical personalities.... ­Holleman offers a fresh take on the Ptolemy dynasty and has delivered what promises to be just the first in an exciting series about Arsinoe, youngest sister of Cleopatra."
—Jane Henriksen Baird, Library Journal (starred review)

"Holleman artfully depicts real women of the ancient world, who used their own wits and wiles to maneuver among the most brilliant men of their age.... A triumphantly fresh tale for historians and casual fans alike."—Carly Silver, ancienthistory.com

"This historically detailed exploration of life on the Nile during the Ptolemy dynasty feels like a breath of fresh air after the 'Downton'-inspired wave of 20th-century historical fiction. Fans of Madeline Miller's Song of Achilles should take note."—BookPage

"Historically detailed and multilayered.... With scintillating visual details of gorgeous palaces, rich temples, and the famous library of Alexandria, [Cleopatra's Shadows]evok[es] a world in which the ancient heroes Alexander and Odysseus-and Greek tragic characters such as Antigone-come to life.... Holleman's imaginative, textured portraits of the lives and ambitions of these little-known heroines will appeal to readers of historical and literary fiction alike."—Publishers Weekly

"The book for you if you're a historical fiction-devotee who craves a lot from her read: multiple protagonists, lovely writing, and, of course, drama."—Meredith Turits, Bustle

Emily Holleman, a graduate of Yale University, spent several years as an editor for Salon -- a job she left to follow Arsinoë and her quest for the throne of Egypt. Currently based in Brooklyn, she has devoted the past three years to reading and writing about the Ptolemies and is, like Arsinoë, a younger sister. She is the author of Cleopatra's Shadows: A Fall of Egypt Novel.
Loading...
or
Not Currently Available for Direct Purchase