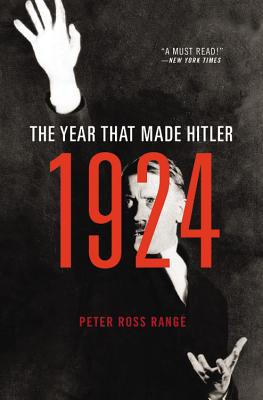 The Year That Made Hitler

The dark story of Adolf Hitler's life in 1924 -- the year that made a monster.

Before Adolf Hitler's rise to power in Germany, there was 1924. This was the year of Hitler's final transformation into the self-proclaimed savior and infallible leader who would interpret and distort Germany's historical traditions to support his vision for the Third Reich.

Everything that would come -- the rallies and riots, the single-minded deployment of a catastrophically evil idea -- all of it crystallized in one defining year. 1924 was the year that Hitler spent locked away from society, in prison and surrounded by co-conspirators of the failed Beer Hall Putsch. It was a year of deep reading and intensive writing, a year of courtroom speeches and a treason trial, a year of slowly walking gravel paths and spouting ideology while working feverishly on the book that became his manifesto: Mein Kampf.

Until now, no one has fully examined this single and pivotal period of Hitler's life. In 1924, Peter Ross Range richly depicts the stories and scenes of a year vital to understanding the man and the brutality he wrought in a war that changed the world forever.

"This book could not be more necessary, as Germany prepares to re-publish Mein Kampf for the first time in 70 years. Range gives us a fluent narrative of Hitler's 13 months in prison, where he wrote his political testament. Eminently readable."—Ronald Rosbottom, author of When Paris Went Dark

"Hundreds of historians, perhaps thousands, have set out to explain how Hitler became Hitler -- but none have succeeded nearly so well, or so brilliantly, as Peter Ross Range. 1924: The Year That MadeHitler now stands front-and-center among those great works that, through a narrative that is both granular and compelling, finally explains one of the great mysteries of our era. Range's deft portrait clicks into place the final necessary nugget in one of our time's darkest eras and provides us with a biographical portrait that is chilling to read -- but that we dare not ignore."—Mark Perry, author of The Most Dangerous Man in America: The Making of Douglas MacArthur

"How did it happen? That's the fateful question that veteran journalist Peter Ross Range asks. With verve, he takes us into the diabolical rise of Adolf Hitler in the pivotal year of 1924, by turns a horrifying yet important story."—Jay Winik, author of 1944: FDR and the Year That Changed History and April 1865

"Descriptive and portentous, Range's is an excellent account of perhaps the critical period in the Hitler saga."—Gilbert Taylor, Booklist

"Occasionally, a year draped in defeat becomes a year of personal triumph that alters the course of history. Peter Ross Range deftly argues that 1924 was such a year for Adolf Hitler, with catastrophic results for the world."—Walter R. Borneman, author of The Admirals and MacArthur at War

"Range's deep knowledge of the figures and events enables him to narrate clearly without being sucked into excessive explication. A lucid description of a year that made all the horror possible, even inevitable."—Kirkus Reviews

Range "let[s] this all-too-human but unique story tell itself... Successfully recreates the atmosphere of postwar Bavaria that helped to "make" Hitler, and charts the unprecedented impact this engineering, enigmatic figure was making."—Anthony Mostrom, The Los Angeles Review of Books

Peter Ross Range is a world-traveled journalist who has covered war, politics and international affairs. A specialist in Germany, he has written extensively for Time, the New York Times, National Geographic, the London Sunday Times Magazine, Playboy, and U.S. News & World Report, where he was a White House correspondent.

He has also been an Institute of Politics Fellow at Harvard's Kennedy School of Government, a Guest Scholar at the Woodrow Wilson International Center in Washington, and a Distinguished International Visiting Fellow at the University of North Carolina Journalism School. He lives in Washington, DC.
Loading...
or support indie stores by buying on