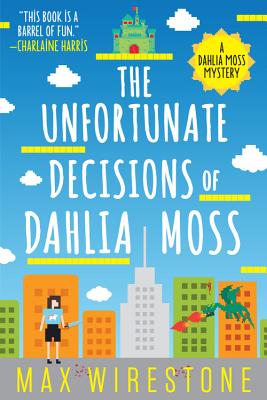 Veronica Mars meets the World of Warcraft in The Unfortunate Decisions of Dahlia Moss, a mystery romp with a most unexpected heroine.
If it were up to me this book would be called Hilarious Things That Happened That Were Not At All Dahlia's Fault -- or HTTHTWNAADF, for short.
OK, I probably shouldn't have taken money from a mysterious eccentric to solve a theft, given that I'm not a detective, and that I am sometimes outwitted by puzzles in children's video games. I probably shouldn't have stolen bags of trash from a potential murder suspect. Arguably-- just arguably, mind you-- it may have been unwise to cos-play at an event where I was likely to be shot at.
But sometimes you just have to take some chances, right? And maybe things do get a little unfortunate. What of it? If you ask me, an unfortunate decision here or there can change your life. In a positive way, just so long you don't killed in the process. Admittedly, that's the tricky bit.
Dahlia Moss Mysteries
The Unfortunate Decisions of Dahlia Moss
The Astonishing Mistakes of Dahlia Moss
The Questionable Behavior of Dahlia Moss

Max Wiretone lives in Lawrence, Kansas with his husband, his son, a very old dog, and more books than a reasonable person should own. Find him @maxwires.

"Revel in the geekery of The Unfortunate Decisions of Dahlia Moss... Dahlia Moss is all of us."—B&N Sci-Fi & Fantasy Blog

"Wirestone's debut is a gem that can be summed up as 'geek chic.'"—Library Journal

"This book is a barrel of fun."—Charlaine Harris, New York Times bestselling author

"A hilarious read sure to delight mystery lovers and gamers alike. With unforgettable characters and a stand-out heroine, Dahlia kept me guessing until the very end. A laugh-out-loud gem of a book."—N.K. Traver, author of Duplicity

"Dahlia's story is a zany, hilarious, laugh fest that made my inner geek girl sit up and search for a caper to solve! Take the clumsy sweetness of Bridget Jones, combine with the intriguing geekiness of Felicity Smoak, and you have Dahlia Moss in this delightful romp!"—Rebecca Zanetti, New York Times bestselling author