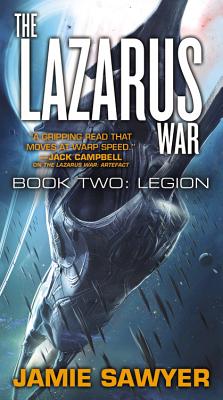 Following Artefact, Legion is the second book of the Lazarus War, an explosive new space adventure series from one of the brightest new stars in science fiction -- perfect for fans of The Edge of Tomorrow, Alien and James S. A. Corey's Expanse series. Conrad Harris is the legend known as Lazarus, and he has died hundreds of times. Using simulant bodies, he runs suicide missions in the depths of space. But he always comes back.As commanding officer of the Lazarus Legion, Harris and his elite Simulant Operations team are humanity's last line of defence against the hostile alien race known as the Krell.Having survived their ordeal on Helios, they're now leading a large-scale mission to the perilous, unexplored region of the Damascus Rift. There, another Artefact has been discovered. It is the product of an ancient alien life form -- and a possible weapon to be used against the Krell.This Artefact could finally help humanity win the war. But what Harris and the Lazarus Legion will discover there is from their worst nightmares . . .Discover the Lazarus War -- the thrilling new space opera series of elite space marines and galactic empires, from one of the most exciting new voices in science fiction.'A gripping read that moves at warp speed' Jack Campbell, author of the Lost Fleet novels, on The Lazarus War: Artefact"A hostile race of alien biomechs somewhat in the mould of H. R. Giger aliens . . . terrorism, subterfuge and traitors . . . starships sporting particle beam weapons, railguns the size of skyscrapers, laser batteries, missiles . . . And then there are the uber-human super-soldiers clad in powered armour and wielding plasma weapons . . . Is that enough for you? . . . This, dear readers, is the good stuff. Recommended" -- Neal Asher, author of the Agent Cormac novels, on The Lazarus War: Artefact"A highly promising science fiction debut -- a fun, gripping adventure story, with a mystery at its core that kept me turning the pages" -- Gary Gibson on The Lazarus War: Artefact"An adrenaline shot of rip-roaring military SF packed with cinematic action sequences and tightly drawn characters" -- Stephen Deas on The Lazarus War: Artefact

Praise For The Lazarus War: Legion…

"Hyper-speed entertainment from a new master of science fiction!"—William C. Dietz on The Lazarus War: Artefact

Jamie Sawyer was born in 1979 in Newbury, Berkshire. He studied Law at the University of East Anglia, Norwich, acquiring a Master's degree in human rights and surveillance law. Jamie is a full-time barrister, practicing in criminal law. When he isn't working in law or writing, Jamie enjoys spending time with his family in Essex. He is an enthusiastic reader of all types of SF, especially classic authors such as Heinlein and Haldeman.
or
Not Currently Available for Direct Purchase