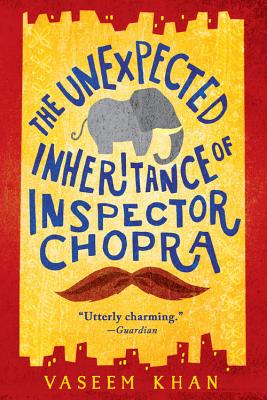 The first is the case of a drowned boy, whose suspicious death no one seems to want solved. And the second is a baby elephant.

As his search for clues takes him across the teeming city of Mumbai, from its grand high rises to its sprawling slums and deep into its murky underworld, Chopra begins to suspect that there may be a great deal more to both his last case and his new ward than he thought.

And he soon learns that when the going gets tough, a determined elephant may be exactly what an honest man needs. . .

"A winning debut...Khan's affection for Mumbai and its residents adds to the novel's charm."—Publishers Weekly

"An enchanting start to a new series."—Woman & Home

"Debut Mumbai-based 'cosy' - complete with baby elephant - keeps things heart-warming while tackling corruption at the highest levels and violent crime at the lowest. Endearing and gripping, it sets up Inspector Chopra - and the elephant - for a long series."—Sunday Times

"The deep love for Mumbai and its people - warts and all - that Inspector Chopra shares with his creator infuses the novel from the beginning. The Unexpected Inheritance of Inspector Chopra is certainly a delightful and uplifting crime caper, but it also comes with an edifying dose of serious social comment, with many of Chopra's preoccupations mirroring those of his creator."—The Bookseller

"A fantastic and heartwarming read... I can't wait to see what happens next!"—First for Women

"An entertaining feel-good read in the tradition of Alexander McCall Smith.... Utterly charming."—Guardian

Vaseem Khan first saw an elephant lumbering down the middle of the road in 1997 when he arrived in India to work as a consultant. It was the most unusual thing he'd ever encountered and served as the inspiration behind his series of crime novels.

He returned to the UK in 2006 and now works at University College London for the Department of Security and Crime Science where he is astonished daily by the way modern science is being employed to tackle crime.
Loading...
or support indie stores by buying on