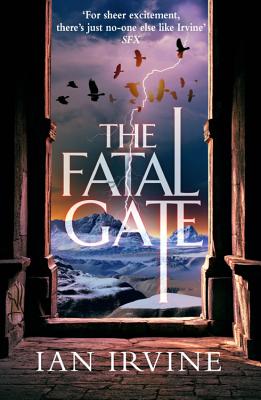 The Fatal Gate (The Gates of Good and Evil #2)

The second book in a brand new epic fantasy duology from fan favorite Ian Irvine, set in the world of his View from the Mirror series.

The cruel Merdrun, the greatest warriors in the void, have invaded Santhenar but their portal backfired and they're stuck on the tropical Isle of Gwine. They're desperately trying to regain contact with the Summon Stone so they can reopen the portal and begin the slaughter of humanity.

The hideous Whelm hold Karan and Llian's daughter, Sulien, in the frozen south and plan to sacrifice her to the Merdrun to gain their favor. Karan races south in a stolen sky ship but fears she will be too late.

Llian, hurled through another portal, sees the summon stone wake and knows the allies have but one chance to destroy the Merdrun -- though it will involve an alchemical quest that has always ended in ruin, a mad invasion in untested sky ships with untrained pilots, then the most unequal battle in all the Histories.

The Gates of Good and EvilThe Summon StoneThe Fatal Gate

"Irvine can now consider himself comfortably ranked next to the works of Robert Jordan and David Eddings."
—SFX Magazine

"A stunning start to an epic fantasy that should become a dark jewel in the genre... Highly recommended."
—SF Revu on Vengeance

"Irvine... is a veteran storyteller who excels in sustaining complex plots with well-rounded characters. Here, he delivers a compelling tale of vengeance, loyalty, and the search for a place in the world."
—Library Journal (Starred Review) on Vengeance

"In a world full of epic fantasy clones, this stands out as a world-building labor of love."
—Locus on The View From the Mirror Quartet

"Irvine is truly a master of his craft."
—RT Book Reviews on Justice

Ian Irvine, a marine scientist who has developed some of Australia's national guidelines for protection of the marine environment, has also written twenty-seven novels. These include the internationally bestselling Three Worlds fantasy sequence (The View from the Mirror, The Well of Echoes, and The Song of the Tears), which has sold over a million copies, a trilogy of thrillers set in a world undergoing catastrophic climate change, Human Rites, and twelve books for younger readers, the latest being the humorous fantasy quartet, Grim and Grimmer.
Loading...
or
Not Currently Available for Direct Purchase