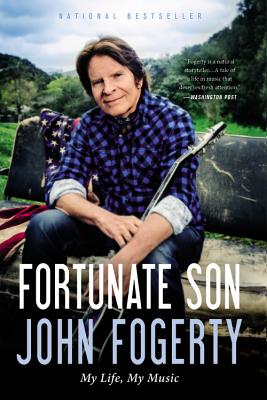 My Life, My Music

The long-awaited memoir from John Fogerty, the legendary singer-songwriter and creative force behind Creedence Clearwater Revival.

Creedence Clearwater Revival is one of the most important and beloved bands in the history of rock, and John Fogerty wrote, sang, and produced their instantly recognizable classics: "Proud Mary," "Bad Moon Rising," "Born on the Bayou," and more. Now he reveals how he brought CCR to number one in the world, eclipsing even the Beatles in 1969. By the next year, though, Creedence was falling apart; their amazing, enduring success exploded and faded in just a few short years.

Fortunate Son takes readers from Fogerty's Northern California roots, through Creedence's success and the retreat from music and public life, to his hard-won revival as a solo artist who finally found love.

Praise For Fortunate Son: My Life, My Music…

"A natural storyteller, folksy and crusty, Fogerty chronicles the brief but brilliant success of his band, Creedence Clearwater Revival, and its tragic collapse."—Greg Schneider, The Washington Post

"A very readable, fascinating account of John Fogerty's life.... One of the best stories of the entire '60s rock 'n' roll era, it is Fogerty's, it is here, and it's worth reading his whole account of the thing. Glad it finally arrived."
—Dave DiMartino, Yahoo! Music

"Fortunate Son will take you on a fascinating journey in the tormented artist's own voice."—Ken Hoffman, Houston Chronicle

"It is fitting that writing--i.e., songwriting--is the main theme of Fogerty's biography, which was penned with the same depth of feeling as his music.... But this isn't just an account of one musician's ups and downs with art and life; Fogerty has created a solid study of popular music over the past 50 years."
—Publishers Weekly

"At the core of this book is a story of redemption fueled by the power of love, and Fogerty's memory is unerring with what brought about that turnaround: wife Julie Fogerty. Some artists cannot be stopped, and that's one of the prime lessons of this book."
—Bill Bentley, The Morton Report

"Mr. Fogerty's story will entertain fans, musicians and lovers of American roots music, yet it stands as one more cautionary tale about the darker side of the music business, where artists not handling their due diligence pay dearly. Fortunate Son is the tale of one who fought those battles and ultimately emerged a survivor."—Rich Kienzle, Pittsburgh Post-Gazette

John Fogerty was songwriter, lead singer, and lead guitarist for Creedence Clearwater Revival and is one of rock's most influential musicians and writers.
Loading...
or support indie stores by buying on