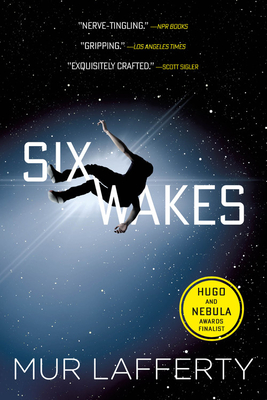 "This is one of the cleverest and most exciting murder mysteries I have ever read. The confined space of the colony ship Dormire is filled with feisty and memorably strange characters who bounce off one another in ways that vary from the comic to the horrific. You like ideas in your science fiction? Lafferty does for clones what Asimov did for robots. Six Wakes will keep you turning pages right up to its startling climax. Mur Lafferty scores in this, her best book!"—James Patrick Kelly, winner of the Hugo, Nebula, and Locus awards

"Lafferty keeps the reader guessing and throws in just enough twists and turns to keep us on the edge of our seat . . . . I loved this book and am excited to read what Lafftery has in store for us next."—Barnes & Noble Science Fiction and Fantasy Blog

"Lafferty delivers a tense nail-biter of a story fueled by memorable characters and thoughtful worldbuilding. This space-based locked-room murder mystery explores complex technological and moral issues in a way that's certain to earn it a spot on award ballots."—Publishers Weekly (starred review)

"Polished writing and a cast of characters who are emotionally on edge make this space adventure a compelling murder-mystery that takes its time revealing the details necessary for readers to rule out possible culprits. The suspense is kept at the forefront of this clever, politically charged tale."—RT Books Reviews

"Lafferty delivers the ultimate locked-room mystery combined with top-notch sf worldbuilding. The puzzle of who is responsible for the devastation on the ship keeps the pages turning."—Library Journal (starred review)

"This is a great book with so much going for it: clever structure, wonderful characters, and a fiendishly clever puzzle that you'll roll over in your mind for months after you close the covers."—BoingBoing

"AndThen There Were None meets Alien in this locked-room, SF-thriller, which grips you from the first scene in the frozen depths of space."—Mysterious Galaxy

"Six Wakes is engrossing and thoroughly satisfying, and Lafferty succeeds at both laying down a mystery and creating a stand-alone sci-fi novel."—Sword & Spaceships (Book Riot)