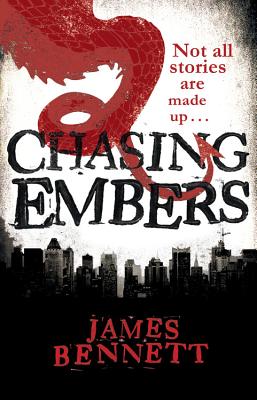 "A thrilling fusion of myth and modernity," revel in this explosive debut fantasy of magic and mayhem that"will have you rooting for dragons over humans and loving every minute of it."(Kevin Hearne, New York Times bestselling author)

There's nothing special about Ben Garston. . .or so he'd have you believe. He won't tell you, for instance, that he's also known as Red Ben. That the world of myth and legend isn't just a fantasy, as we've been led to believe. And he certainly can't let you know the secret of what's hiding just beneath his skin. . .

But now a centuries-old rivalry has just resurfaced, and the delicate balance between his world and ours is about to be shattered. Something is hiding in the heart of the city -- and it's about to be unleashed.

Behind every myth, there's a spark of truth. . .

"A thrilling fusion of myth and modernity, Chasing Embers will have you rooting for dragons over humans and loving every minute of it."—Kevin Hearne, New York Times bestselling author of Hounded

"Inventive and vivid ... This is smart action storytelling, and Bennett is assembling the materials for a terrific conclusion."—Publishers Weekly (starred review) on Raising Fire

James Bennett is a debut fantasy author currently living in Wales. Born in England and raised in South Africa and Cornwall, his travels have furnished him with an abiding love of different cultures, history and mythology. He's had several short stories published internationally and draws inspiration from long walks, deep forests and old stones. Also the odd bottle of wine.
Loading...
or
Not Currently Available for Direct Purchase