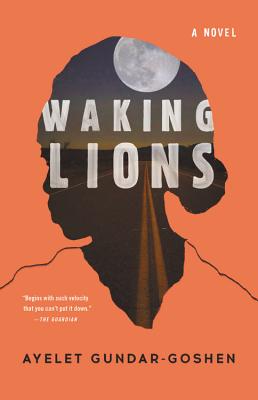 After one night's deadly mistake, a man will go to any lengths to save his family and his reputation.

Neurosurgeon Eitan Green has the perfect life -- married to a beautiful police officer and father of two young boys. Then, speeding along a deserted moonlit road after an exhausting hospital shift, he hits someone. Seeing that the man, an African migrant, is beyond help, he flees the scene.

When the victim's widow knocks at Eitan's door the next day, holding his wallet and divulging that she knows what happened, Eitan discovers that her price for silence is not money. It is something else entirely, something that will shatter Eitan's safe existence and take him into a world of secrets and lies he could never have anticipated.

Waking Lions is a gripping, suspenseful, and morally devastating drama of guilt and survival, shame and desire from a remarkable young author on the rise.

Ayelet Gundar-Goshen was born in Israel in 1982 and holds an MA in clinical psychology from Tel Aviv University. She has worked for the Israeli civil rights movement, and is an award-winning screenwriter. She won Israel's prestigious Sapir Prize for best debut. Waking Lions, her first novel published in the U.S., has been translated into nine languages.

"Waking Lions offers a commentary on privilege and otherness, challenging readers to confront their own blind spots and preconceptions....Trained as a clinical psychologist, Gundar-Goshen examines her characters with the same formidable gaze. Nobody emerges unscathed....Gundar-Goshen is adept at instilling emotional depth into a thriller plot, delivering the required twists and turns along with an incisive portrayal of her characters' guilt, shame and desire, fluidly shifting between their perspectives....Readers will be rewarded by [Waking Lions'] exhilarating, cinematic finale. Skillfully translated by Sondra Silverston, Waking Lions is a sophisticated and darkly ambitious novel, revealing an aspect of Israeli life rarely seen in its literature."—Ayelet Tsabari, New York Times Book Review

"Vividly imagined, clever, and morally ambiguous....[Waking Lions] is a smart and disturbing exploration of the high price of walking away, whether it be from a car accident or from one's own politically unstable homeland."
—Maureen Corrigan, National Public Radio's "Fresh Air"

"Waking Lions, in a propulsive translation from Hebrew by Sondra Silverston, yokes a crime story to thorny ethical issues in ways reminiscent of Donna Tartt and Richard Price...it's a rare book that can trouble your conscience while holding you in a fine state of suspense."
—Sam Sacks, Wall Street Journal

"Uncommonly complex, socially aware, and ethically ambiguous....plot is almost secondary to the political implications Gundar-Goshen explores - but what a plot it is, fuel for meditations on integrity and the layered guilt of the Israeli bourgeoisie."
—Boris Kachka, New York "7 Books You Need to Read This February"

"Anyone who loves the magic of the printed word should read Waking Lions....Gundar-Goshen has earned, and deserves, a worldwide audience, and this magnificent novel may well be the vehicle for that."—Joe Hartlaub, Bookreporter

"It pulled me right in. In just 18 words, a spell was cast and broken, and I couldn't wait to go on."

"Gripping....twists and turns like a thriller."
—Sunday Times UK

"It is a literary achievement for its page-turning exploration of inconvenient empathy and culpability. Gundar-Goshen's descriptions of pain and medicine are tender and startling, but perhaps the novel's greatest strength is the way it considers how we look at each other, the power of our gaze on strangers and on those we love. It's about seeing and being seen, about pride and power. This is a brave novel, socially aware and truly unforgettable."
—Cat Acree, BookPage

"Waking Lions is immensely suspenseful. Ayelet Gundar-Goshen's alarmingly realistic and superbly written novel will leave readers wondering what they might be capable of under duress, and what makes a good person do such an awful thing--and if a marriage can survive such deception. The difficult decisions faced by Eitan, Liat and the Eritrean community are haunting."
—Jessica Howard, Shelf Awareness (starred review)

"Ayelet Gundar-Goshen's novel, Waking Lions, is more than your guilty-pleasure thriller - although its twists and turns will keep you in suspense until the last page."
—E. Ce Miller, Bustle

"It's not every day a writer like this comes our way."
—Guardian UK

"....a work of great subtlety which wrenches at the heart of both the family and the state, and makes for compulsive reading.... [A] sophisticated, angst-filled thriller."
—Brian Martin, Spectator UK

"Mesmerizing....Smoothly alternating points of view, it uses the format of a thriller to study the almost unbridgeable gap between insider and outsider. The complex relationships between Israelis, Bedouin Arabs, and Eritreans may be unique to Israel, but that social dynamic will reverberate meaningfully with U.S. readers as well."

"Extraordinarily assured. Its themes are daring....Waking Lions is a startlingly achieved novel, with all the page-turning appeal of a fine-honed thriller. Gundar-Goshen gives voice to the refugee population that haunts the margins of Israeli society, probing the very hardest of the hard questions, both universal and specific to Israel, with the finesse of the brain surgeon and the wisdom of the philosopher, both of whom know only too well that there are no easy answers."
—Natasha Lehrer, Jewish Quarterly

"Waking Lions is a classy, suspenseful tale of survival where the good guys and the bad guys are harder to distinguish than you might think."
—The Times UK

"Waking Lions has the type of seductive plot twists-a hit-and-run, a blackmailing scheme, a crime that threatens to rend a marriage-that, seemingly, only a fiction writer could concoct. But in fact, the 34-year-old writer, who lives in Israel, borrowed much of the premise of the story from real life."
—Daniel Lefferts, Publishers Weekly "Writers to Watch Spring 2017"

"A literary thriller that is used as a vehicle to explore big moral issues. I loved everything about it."
—Daily Mail UK

"It is a literary achievement for its page-turning exploration of inconvenient empathy and culpability. Gundar-Goshen's descriptions of pain and medicine are tender and startling, but perhaps the novel's greatest strength is the way it considers how we look at each other, the power of our gaze on strangers and on those we love. It's about seeing and being seen, about pride and power. This is a brave novel, socially aware and truly unforgettable."
—Cat Acree, BookPage

"Why should Jewish immigrants enjoy immediate citizenship in Israel, while African immigrants are detained or deported? Of course, these problems are not unique to Israel. Exactly the same arguments over immigration, on a much larger scale, are dominating the politics of Europe and the United States. It is surely for this reason that Waking Lions, the new psychological thriller by Israeli novelist Ayelet Gundar-Goshen, has broken out to become a worldwide phenomenon."—Adam Kirsch, Tablet Magazine

"In Waking Lions, the bad guys are the good guys, the victims are the perpetrators, and the ending is definitely not what you'll expect."
—E. Ce Miller, Bustle "15 Books With Plot Twists You Never Saw Coming"

"Gundar-Goshen transcends the genre of thriller...Waking Lions is a work of exquisite literary craft, a book that penetrates to the heart and soul of its characters."—Jonathan Kirsch, Jewish Journal
or
Not Currently Available for Direct Purchase
Copyright © 2020 American Booksellers Association