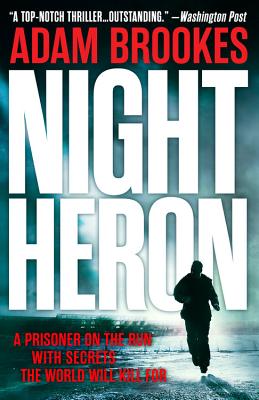 Set in China, and ripped from today's headlines, comes a pulse-pounding debut that reinvents the spy thriller for the 21st century.

A lone man, Peanut, escapes a labor camp in the dead of night, fleeing across the winter desert of north-west China.

Two decades earlier, he was a spy for the British; now Peanut must disappear on Beijing's surveillance-blanketed streets. Desperate and ruthless, he reaches out to his one-time MI6 paymasters via crusading journalist Philip Mangan, offering military secrets in return for extraction.

But the secrets prove more valuable than Peanut or Mangan could ever have known. . . and not only to the British.

"The must-read thriller of the year."—NPR Books

"One of the best and most compulsively readable spy-fiction debuts in years."—Kirkus

"The pace is frenetic and Brookes does a wonderful job with both the high-tech world of cyber intelligence and survival on Beijing's gritty, smog-smothered streets. Highly recommended."—The Bookseller

Night Heron is a fascinating portrait of the dangerous complexities of spying in a restricted country, the competing agendas driving international intelligence, and China's startlingly varied social realities.A must-read for fans of espionage and smart global fiction in general.—Booklist (starred review)

"Night Heron is a wonderfully cinematic novel -- I felt myself visually transported into every scene, watching the action unfold -- that also immersed me in the sounds and smells and feel of China, all the while telling a rich, complex espionage story. A remarkable accomplishment."—Chris Pavone, author of international bestseller The Expats

"Fans of the international espionage genre will inhale this fast tale in a few suspenseful breaths. Brookes uses multiple narrators -- the spy, the engineer, the journalist, the agent, the boss -- whose conflicting alliances tell the real story."—Library Journal

"Brookes, a correspondent for BBC News in Washington, DC, who was formerly based in China, takes readers deep inside the culture and daily routines of that country in his outstanding fiction debut... Good chase scenes and tense dialogue, coupled with a convincing picture of what actually happens in the corridors of power, make Brookes a thriller writer to watch."—Publishers Weekly (starred review)

Adam Brookes was for many years a journalist and foreign correspondent for BBC News. He reported from China, Indonesia, the US and many other countries, Iraq and Afghanistan among them. His debut novel, Night Heron, was nominated for the 2014 CWA John Creasey Dagger and appeared on best of the year lists in the TLS, Kirkus and NPR; its follow-up Spy Games was nominated for the CWA Ian Fleming Steel Dagger. The Spy's Daughter is his third novel. He lives with his family in Takoma Park, Maryland.
Loading...
or support indie stores by buying on