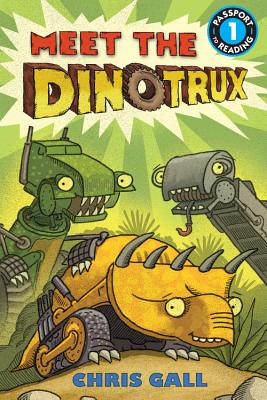 In this beginning reader, Dozeratops wants to meet new Dinotrux. But they are on the other side of the river. Can the mighty monsters work together to build a bridge? Find out in this friendship adventure, where you will learn about ten of these part-dinosaur, part-truck beasts! (Passport to Reading Level 1)

Praise For Meet the Dinotrux (Passport to Reading Level 1)…

Chris Gall is the award-winning author and illustrator of Revenge of the Dinotrux, Substitute Creacher, Dear Fish, There's Nothing to Do on Mars, and Dinotrux, a Publishers Weekly Best Children's Book of 2009. His books have received numerous starred reviews and awards including a Borders Original Voices Book for 2006 for Dear Fish and a Kirkus Best Children's Book for 2008 for There's Nothing to Do on Mars. Chris has won a multitude of awards from organizations like the Society of Illustrators and Communication Arts Magazine, and is also the illustrator of America the Beautiful, a Publishers Weekly Best Children's Book of 2004. He lives in Tucson, Arizona.
Loading...
or
Not Currently Available for Direct Purchase