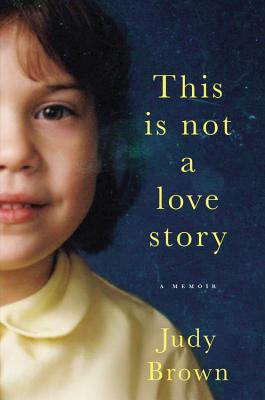 This Is Not a Love Story (Hardcover)

A razor-sharp, hilarious, and poignant memoir about growing up in the closed world of the ultraorthodox Jewish community.

The third of six children in a family that harks back to a gloried Hassidic dynasty, Judy Brown grew up with the legacy of centuries of religious teaching, and the faith and lore that sustained her people for generations. But her carefully constructed world begins to crumble when her "crazy" brother Nachum returns home after a year in Israel living with relatives. Though supposedly "cured," he is still prone to retreating into his own mind or erupting in wordless rages.

The adults' inability to make him better -- or even to give his affliction a name -- forces Judy to ask larger questions: If God could perform miracles for her sainted ancestors, why can't He cure Nachum? And what of the other stories her family treasured? Judy starts to negotiate with God, swinging from holy tenets to absurdly hilarious conclusions faster than a Talmudic scholar: she goes on a fast to nab coveted earrings; she fights with her siblings at the dinner table for the ultimate badge of honor ("Who will survive the next Holocaust?"); and she adamantly defends her family's reputation when, scandalously, her parents are accused of having fallen in love -- -which is absolutely not what pious people do.

For all its brutal honesty about this insular community, This Is Not a Love Story is ultimately a story of a family like so many others, whose fierce love for each other and devotion to their faith pulled them through the darkest time in their lives.

Judy Brown wrote the controversial novel Hush -- a finalist for the 2011 Sydney Taylor Award for outstanding book on the Jewish experience -- under a pseudonym because of feared backlash from the Chassidic world. Brown's identity has since been revealed and she has left Chassidism. She has been profiled in the New York Times Magazine and has written for the Huffington Postand the Jewish Daily Forward. She holds a master's in creative writing and lives in New York City.

Praise For This Is Not a Love Story: A Memoir…

"I love books about families and this one is so warm and funny that I couldn't put it down....This Is Not a Love Story actually is one."—Nina Stibbe, author of Man at the Helm and Love, Nina

"An instant classic....With echoes of Scout Finch, the feisty Menuchah guides readers on an unforgettable journey of love, justice and compassion."
—-Leah Vincent, author of Cut Me Loose: Sin and Salvation After My Ultra-Orthodox Girlhood

"In this thoughtful and engaging memoir, Judy Brown offers a fascinating glimpse into a world, a family, a life....I was utterly absorbed."
—Jennifer Traig, author of Devil in the Details and Well Enough Alone

"Vividly capturing the voice of her younger self, Brown portrays an ultra-Orthodox Jewish community marked by piety, prejudice, and superstition, and her loving family roiled by the mystifying, often terrifying, affliction of her younger brother.... A tender story gently told."
—-Kirkus Reviews

"An unforgettable portrait of anguish and hope."
—People

"A riveting examination of family and love....This book is indeed a love story in many ways."
—Sarah Rachel Egelman, Book Reporter

"This most certainly is a love story. It's also a coming-of-age story, a family's story, and a story of struggling through the unknown.... She tells her story with the earnestness, naivete, humor, and gentleness of a sheltered eight-year-old.... Readers will be absorbed and enveloped by this family and the descriptive flow of the story."
—Renita Last, Jewish Book Council
or
Not Currently Available for Direct Purchase
Copyright © 2020 American Booksellers Association