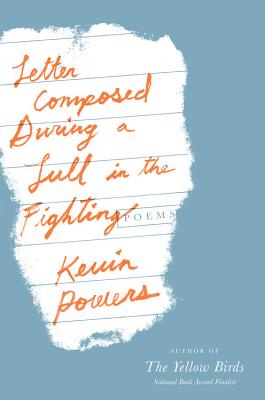 Letter Composed During a Lull in the Fighting (Hardcover)

The award-winning author of The Yellow Birds returns with an extraordinary debut poetry collection.

National Book Award finalist, Iraq war veteran, novelist and poet Kevin Powers creates a deeply affecting portrait of a life shaped by war. Letter Composed During a Lull in the Fighting captures the many moments that comprise a soldier's life: driving down the Texas highway; waiting for the unknown in the dry Iraq heat; writing a love letter; listening to a mother recount her dreams.

Written with evocative language and discernment, Powers's poetry strives to make sense of the war and its echoes through human experience. Just as The Yellow Birds was hailed as the "first literary masterpiece produced by the Iraq war," this collection will make its mark as a powerful, enduring work (Los Angeles Times).

Praise For Letter Composed During a Lull in the Fighting: Poems…

"Powers is a poet first, so The Yellow Birds is spare, incredibly precise, unimproveable."--Dave Eggers, Observer

"Kevin Powers has produced a masterpiece of war literature and a classic."--Hilary Mantel, London Times

"A powerful work of art....Put it way up on that high rare shelf alongside Ernest Hemingway and Tim O'Brien."--Anthony Swofford
or support indie stores by buying on
Copyright © 2020 American Booksellers Association