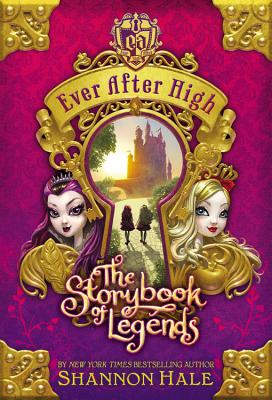 The Storybook of Legends

At Ever After High, an enchanting boarding school, the children of fairytale legends prepare themselves to fulfill their destinies as the next generation of Snow Whites, Prince Charmings and Evil Queens...whether they want to or not. Each year on Legacy Day, students sign the Storybook of Legends to seal their scripted fates. For generations, the Village of Book End has whispered that refusing to sign means The End-both for a story and for a life.

As the daughter of the Evil Queen, Raven Queen's destiny is to follow in her mother's wicked footsteps, but evil is so not Raven's style. She's starting to wonder, what if she rewrote her own story? The royal Apple White, daughter of the Fairest of Them All, has a happy ever after planned for herself, but it depends upon Raven feeding her a poison apple in their future.

What if Raven doesn't sign the Storybook of Legends? It could mean a happily never after for them both.


Praise For Ever After High: The Storybook of Legends…

Praise for Ever After High: Storybook of Legends:
"What's a girl to do when her mother is the fairy-tale world's worst evil queen? Follow in her footsteps? Never!

At the beginning of this series opener, it's the first day of school at Ever After High, where the offspring of famous fairy-tale characters begin their second year. For these students, Legacy Day beckons, at which time each will sign the Storybook of Legends and take the pledge to replay their parents' roles. Once they ink their names, the stories they spring from will be safely preserved, but if one does not, rumors have it that the tale-as well as the student-will vanish in a posthaste "poof." Most are all aflutter to fulfill their requisite destinies, but Raven Queen, the daughter of the exquisitely wicked Evil Queen, doesn't have an evil bone in her body. If she signs, she is duty-bound to poison Apple White (Snow's daughter), but she wants to create her own future. When Raven discovers that two fairy-tale sisters long ago broke their pledge, she enlists the sleuthing skills of her wacky roommate, Madeline (as in Hatter), and Apple herself to unravel the sisters' ultimate fate. Hale has created a delightfully revamped, newly fashioned cast of fairy-tale characters (and in hipper clothes no less-unsurprising, as the book introduces a new line of Mattel dolls) and gives readers a terrific protagonist to root for. Magic and humor abound, and fairy-tale wordplay flies.

"Rollicking...a fun read...Unexpected plot twits lead to an ending that, unlike a traditional "happy ever after," promises continued intrigue in new outings. This is a good bet for those who can't get enough of fractured and retold tales."—Booklist

New York Times best-selling author Shannon Hale knew at age ten it was her destiny to become a writer. She has quested deep into fairytales in such enchanting books as The Goose Girl, Book of a Thousand Days, Rapunzel's Revenge, and Newbery Honor winner Princess Academy. With the princely and valiant writer Dean Hale, Shannon co-authored four charming children, who are free to follow their own destinies. Just so long as they get to bed on time.
Loading...
or
Not Currently Available for Direct Purchase