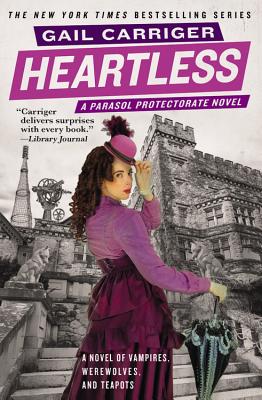 Lady Alexia Maccon, soulless, is at it again, only this time the trouble is not her fault in the fourth book of the NYT bestselling Parasol Protectorate series.
When a mad ghost threatens the queen, Alexia is on the case, following a trail that leads her deep into her husband's past. Top that off with a sister who has joined the suffragette movement (shocking!), Madame Lefoux's latest mechanical invention, and a plague of zombie porcupines, Alexia barely has time to remember she happens to be eight months pregnant.

Will Alexia manage to determine who is trying to kill Queen Victoria before it is too late? Is it the vampires again or is there a traitor lurking about in wolf's clothing? And what, exactly, has taken up residence in Lord Akeldama's second best closet?
HEARTLESS is the fourth book of the Parasol Protectorate series: a comedy of manners set in Victorian London, full of werewolves, vampires, dirigibles, and tea-drinking.
The Parasol Protectorate
Soulless
Changeless
Blameless
Heartless
Timeless

Praise For Heartless (The Parasol Protectorate #4)…

"Carriger has created a wonderfully detailed world that is just one step to the side of our own."—sfrevu.com on Changeless

"A series for female fantasy fans that are looking for a stroke of ingenuity amongst the torrents of fanged fiction."—SciFi Now on Heartless

"Carriger's writing remains crisp and witty, and the affectionate banter between Lord and Lady Maccon will please series fans."—Publisher's Weekly on Heartless
or support indie stores by buying on
(This book is on backorder)
Copyright © 2020 American Booksellers Association