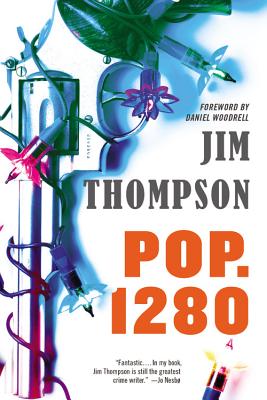 Nick Corey is a terrible sheriff on purpose. He doesn't solve problems, enforce rules or arrest criminals. He knows that nobody in tiny Potts County actually wants to follow the law and he is perfectly content lazing about, eating five meals a day, and sleeping with all the eligible women.

Still, Nick has some very complex problems to deal with. Two local pimps have been sassing him, ruining his already tattered reputation. His girlfriend Rose is being terrorized by her husband. And then, there's his wife and her brother Lenny who won't stop troubling Nick's already stressed mind. Are they a little too close for a brother and a sister?

With an election coming up, Nick needs to fix his problems and fast. Because the one thing Nick does know is that he will do anything to stay sheriff. Because, as it turns out, Sheriff Nick Corey is not nearly as dumb as he seems.

In Pop. 1280, widely regarded as a classic of mid-20th century crime, Thompson offers up one of his best, in a tale of lust, murder, and betrayal in the Deep South that was the basis for the critically acclaimed French film Coup de Torchon.

Jim Thompson was born in Anadarko, Oklahoma. He began writing fiction at a very young age, selling his first story to True Detectivewhen he was only fourteen. Thompson eventually wrote twenty-nine novels, all but three of which were published as paperback originals. Thompson also co-wrote two screenplays (for the Stanley Kubrick films The Killing and Paths of Glory). Several of his novels have been filmed by American and French directors, resulting in classic noir including The Killer Inside Me (1952), After Dark My Sweet(1955), and The Grifters (1963).
Loading...
or support indie stores by buying on