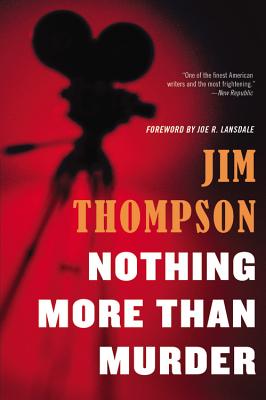 Nothing More than Murder (Mulholland Classic)

Joe Wilmot can't stand his wife Elizabeth. But he sure loves her movie theater. It's a modest establishment in a beat-down town--but Joe has the run of the place, and inside its walls, he's king. Without the theater, he'd be sunk. Without his leadership, the theater would close in a heartbeat. If it isn't the life Joe imagined for himself, at the very least, it's livable.

Everything changes when Joe falls for the housemaid Carol, and the two can't keep it a secret from Elizabeth. Elizabeth won't leave Joe the theater unless he provides for her...but he's put all his money into the show house.

Carol and Joe's only hope is the life insurance policies they've taken out on each other. If one of them were to be presumed dead, they'd have more than enough money to solve all their problems...

No one knows murder better than Jim Thompson and in this incisive foray into the dark dealings of the mid-20th century movie industry, he doesn't disappoint, in the riveting story of a love triangle gone horribly wrong, and just how far one man will go to hold on to a desperate dream.

Praise For Nothing More than Murder (Mulholland Classic)…

"If Raymond Chandler, Dashiell Hammett and Cornell Woolrich would have joined together in some ungodly union and produced a literary offspring, Jim Thompson would be it...His work...casts a dazzling light on the human condition."—Washington Post

"Like Clint Eastwood's pictures it's the stuff for rednecks, truckers, failures, psychopaths and professors ... one of the finest American writers and the most frightening, [Thompson] is on best terms with the devil. Read Jim Thompson and take a tour of hell."—The New Republic

"The most hard-boiled of all the American writers of crime fiction."—Chicago Tribune

Jim Thompson was born in Anadarko, Oklahoma. He began writing fiction at a very young age, selling his first story to True Detectivewhen he was only fourteen. Thompson eventually wrote twenty-nine novels, all but three of which were published as paperback originals. Thompson also co-wrote two screenplays (for the Stanley Kubrick films The Killing and Paths of Glory). Several of his novels have been filmed by American and French directors, resulting in classic noir including The Killer Inside Me (1952), After Dark My Sweet(1955), and The Grifters (1963).
Loading...
or support indie stores by buying on