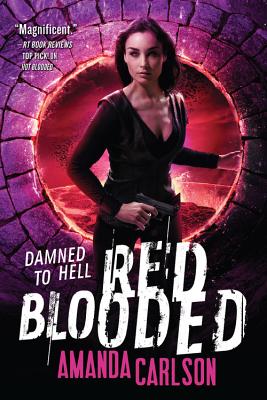 Jessica is going to Hell.

After settling a fragile truce between the vampires, werewolves and witches, the last thing Jessica wants to do is face the demons head on. But when the Prince of Hell kidnapped her brother, he set into motion a chain of events that even Jessica doesn't have the power to stop.

Now, Jessica must go into battle again. But Hell is a whole new beast -- new rules, more dangerous demons, and an entirely foreign realm. And when Jessica is dropped into the Underworld too soon, without protection or the help of her friends, she must figure out just how powerful she can be. . . or she will never make it out alive.

"Carlson has crafted a real roller coaster of a book and series!"—RT Book Reviews on Red Blooded

"Amanda Carlson's debut novel is a fast-paced tale with a cliffhanger ending that left me panting for more. Full Blooded left me on the edge of my seat from cover to cover."—New York Times bestselling author Faith Hunter

"A wild, wolfy ride that will have you howling for more!"—Kristen Painter, author of Blood Rights on Full Blooded

"Picking up after the life-changing events of Hot Blooded, Carlson doesn't give her heroine or readers a chance to breathe as Cold Blooded starts off with a literal bang. Besides delivering terrific action sequences, Carlson is doing an exceptional job of exploring and unveiling the hidden depths of her characters."—RT Book Reviews (Top Pick) on Cold Blooded

"Rising star Carlson is rapidly building a rich world filled with intrigue, betrayal and hidden prophecy; all in all, this series second is a magnificent showing."—RT Books Reviews (Top Pick) on Hot Blooded

A Minnesota girl, born and bred, Amanda Carlson began writing in earnest after her second child was born. She's addicted to playing Scrabble, tropical beaches, and Ikea. She lives in Minneapolis with her husband and three kids.
Loading...
or support indie stores by buying on