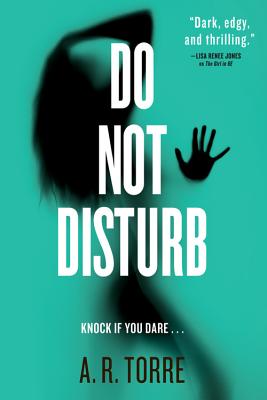 Do Not Disturb (A Deanna Madden Novel #2)

The rules were simple and I broke them. Now I must face the consequences. Everyone else must face me.

Praise For Do Not Disturb (A Deanna Madden Novel #2)…

"One of the most eagerly anticipated sequels of the year, Do Not Disturb is every bit as twisted and exciting as its predecessor.... If you enjoy your thrillers intensely raw, dark and unusual, look no further. Torre is captivating."—RT Book Reviews on Do Not Disturb

"It's not for the feint hearted, granted, but A.R Torre does an incredible job of taking a sensitive subject matter and telling a compelling and thought provoking story... The Girl in 6E is definitely worth a peek.—Jodi Ellen Malpas, #1 New York Times and Sunday Times bestselling author on The Girl in 6E

"An incredible debut. Gritty, unique, primal, full of angst, oddly feminist, and right up my alley. The Girl in 6E deviates from formulaic romance to deliver something truly special and worthy of praise and attention. A dark soul like me isn't often surprised by controversy or taboo subject matter, but this book delivers and I'll be reading more A.R. Torre books in the future. Kudos!"—CJ Roberts, New York Times and USA Today bestselling author of The Dark Duet

"Dark, edgy, and thrilling in a completely unexpected way."
—Lisa Renee Jones, New York Times bestselling author of The Inside Out series

"The Girl in 6E is uniquely twisted and captivates from the beginning. The premise is entirely original, as are the characters and the pacing. The main character may be a cold killer, but inside is a woman with a soul who sacrifices everything to keep from unleashing herself on the world.... Torre has written a beautifully warped thriller that will be staying with this reviewer for a long time to come."—RT Book Reviews, Top Pick! (4.5 Stars)

"A taut thriller unlikes any suspense novel today."
—The Quincy Herald-Whig on The Girl in 6E

A.R. Torre is an open pseudonym for Alessandra Torre, an award-winning New York Times and USA Today bestselling author of eleven novels. Her books primarily focus on romance and suspense, all with a strong undercurrent of sexuality. Torre has been featured in such publications as Elle and Elle UK, co-hosted Dirty Sexy Funny with Jenny McCarthy, as well as guest blogged for the Huffington Post and RT Book Reviews. She is also the Bedroom Blogger for Cosmopolitan.com.