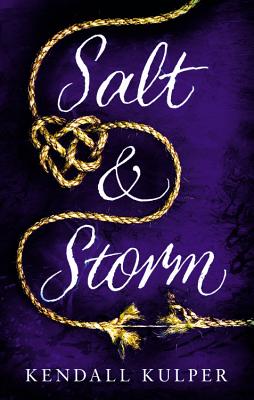 A sweeping historical romance about a witch who foresees her own murder--and the one boy who can help change her future.

Sixteen-year-old Avery Roe wants only to take her rightful place as the witch of Prince Island, making the charms that keep the island's whalers safe at sea, but her mother has forced her into a magic-free world of proper manners and respectability. When Avery dreams she's to be murdered, she knows time is running out to unlock her magic and save herself.

Avery finds an unexpected ally in a tattooed harpoon boy named Tane--a sailor with magic of his own, who moves Avery in ways she never expected. Becoming a witch might stop her murder and save her island from ruin, but Avery discovers her magic requires a sacrifice she never prepared for.

"As rich and dark as the ocean itself, Salt & Storm is a tour de force!...This perfect fall read will leave readers bewitched and anxious for more Kulper-penned tales."—RT Book Reviews

"I love this book. Kulper beautifully and lovingly captures the struggles of a young, headstrong girl battling forces both natural and supernatural, and discovering through the journey the joys and searing pain of first love."—Kathleen Kent, New York Times-bestelling author of The Outcasts and The Heretic's Daughter

"The well-developed romance between Tane and Avery is searing."—The Bulletin

Kendall Kulper grew up in New Jersey and currently lives in Boston with her husband, daughter, and dog. She graduated from Harvard University, where she studied history and literature. Thanks to Salt & Storm and Drift & Dagger, she knows more about nineteenth-century whaling than she ever imagined.
Loading...
or
Not Currently Available for Direct Purchase