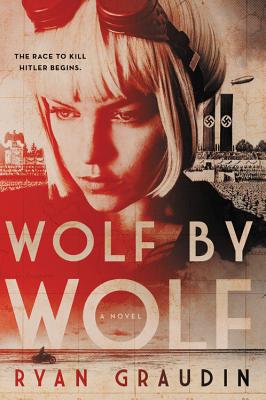 One girls mission to win a race and kill Hitler

"Wild and gorgeous, vivid and consuming. I loved it! I can't wait for the sequel." --Laini Taylor, New York Times bestselling author of the Daughter of Smoke & Bone trilogy
Her story begins on a train.
The year is 1956, and the Axis powers of the Third Reich and Imperial Japan rule. To commemorate their Great Victory, they host the Axis Tour: an annual motorcycle race across their combined continents. The prize? An audience with the highly reclusive Adolf Hitler at the Victor's ball in Tokyo.
Yael, a former death camp prisoner, has witnessed too much suffering, and the five wolves tattooed on her arm are a constant reminder of the loved ones she lost. The resistance has given Yael one goal: Win the race and kill Hitler. A survivor of painful human experimentation, Yael has the power to skinshift and must complete her mission by impersonating last year's only female racer, Adele Wolfe. This deception becomes more difficult when Felix, Adele's twin brother, and Luka, her former love interest, enter the race and watch Yael's every move.
But as Yael grows closer to the other competitors, can she be as ruthless as she needs to be to avoid discovery and stay true to her mission?
From the author of The Walled City comes a fast-paced and innovative novel that will leave you breathless.

Praise For Wolf by Wolf: One girls mission to win a race and kill Hitler…


A Huffington Post Top Ten YA Book of the Year

"Wild and gorgeous, vivid and consuming. I loved it! I can't wait for the sequel."—Laini Taylor, New York Times bestselling author of the Daughter of Smoke & Bone trilogy

"A haunting portrayal of one girl's courage in the face of a vicious world. I was racing along with Yael until the book's heart-pounding conclusion. A triumph."—Megan Shepherd, author of The Madman's Daughter

"Ryan Graudin opens one of the darkest chapters in history and spins a what if into an incredible tale of survival, identity, and purpose. This is the kind of book you can't put down, and the kind that follows you long after you have. It is, quite simply, a masterpiece."—Victoria Schwab, author of The Archived series


"The rush of an action movie combined with a flawlessly executed history, this is the book I've been waiting for. I loved WOLF BY WOLF, and I'm not speaking to my friends till they've read and loved it too."
—Jackson Pearce, author of Sisters Red and Tsarina


"WOLF BY WOLF completely immerses the reader in a story they'll never forget. Filled to the brim with tension and intrigue, nonstop action, and a vivid cast of characters, you'll feel every bump in the road they ride. I simply couldn't stop reading--and wherever Ryan Graudin rides next, I'll follow."
—Amie Kaufman, New York Times bestselling author of These Broken Stars


"We loved Yael's poignant flashbacks and the heart-pounding adrenaline of the race and her mission. This is WWII meets X-men meets The Hunger Games on motorcycles, with a kickass heroine and cute guys.—Justine Magazine

* "Graudin (The Walled City) crafts another fast-paced, enthralling tale of sacrifice and dogged determination as she fuses alternate history and spy-thriller suspense. A provocative rumination on self-preservation, the greater good, and the boundaries that keep heroes from becoming as cruel as those they fight."—Publishers Weekly (starred review)

* "Beyond its breath-taking climax, the novel provokes deeper questions about the 'moreness' Yael begins to see in her competitors' identities, and in her own."—VOYA (starred review)

"With this complex and well-crafted mix of action, emotion, and alternate history, Graudin provides something new and notable for readers of historical and dystopian fiction."—The Bulletin

"Give this to fans of espionage novels, and strong female protagonists; some dystopian fans may even take to the resistance storyline."—School Library Connection
or
Buy Here
Copyright © 2020 American Booksellers Association