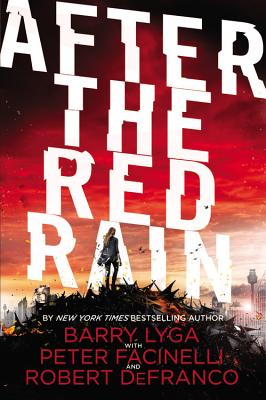 After the Red Rain

On the ruined planet Earth, where 50 billion people are confined to megacities and resources are scarce, Deedra has been handed a bleak and mundane existence by the Magistrate she works so hard for. But one day she comes across a beautiful boy named Rose struggling to cross the river--a boy with a secretive past and special abilities, who is somehow able to find comfort and life from their dying planet.

But just as the two form a bond, it is quickly torn apart after the Magistrate's son is murdered and Rose becomes the prime suspect. Little do Deedra and Rose know how much their relationship will affect the fate of everyone who lives on the planet.

Praise For After the Red Rain…

"A fast-paced, nail-biting, action-packed must-read with a compelling commentary on the consequences of overpopulation."
—Emily Griffin, #1 New York Times bestselling author of Something Borrowed and The One & Only

"Stunning...like a future-shock movie playing in your head."
—Lee Child, author of the Jack Reacher series

"A powerful tale of the essence of truth and the strength of free will set in an Orwellian world brimming with imagination."
—CJ Lyons, New York Times bestselling author of Watched

"Rose's true genetic nature is unexpectedly novel, and that--combined with striking imagery, thrilling action, and adolescent true love--makes this a sure bet. Best-selling Barry Lyga gets his mitts on dystopian romance? Better get two."
—Booklist

Peter Facinelli has appeared in films such as Riding in Cars with Boys and Can't Hardly Wait, and more recently as Dr. Carlisle Cullen in the Twilight Saga films.

Rob DeFranco partnered with Peter Facinelli to form A7SLE Films, and has produced Loosies, The Last Word, and the upcoming Street Soldier for FOX.
Loading...
or
Not Currently Available for Direct Purchase