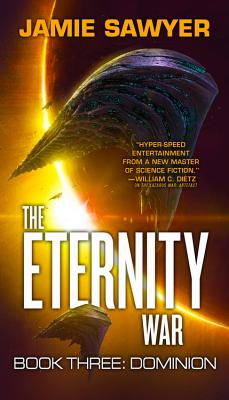 Following Pariah and Exodus comes Dominion, the explosive concluding chapter of the Eternity War trilogy, in which the fate of the Alliance-and the galaxy-rests in the hands of Lieutenant Keira Jenkins and her team of Jackals.
The Black Spiral terrorist organization and their mysterious leader, Warlord, have unleashed a deadly virus across the Maelstrom. There is nothing that can stop them...except, maybe, Lieutenant Jenkins and her Jackals.
Back in Alliance territory with new weapons, new armor, and new bodies, the Jackals are given a secret assignment: to investigate the mysterious Aeon, a potential ally in the escalating conflict, and a force that might shift the gears of war in favor of the Alliance.
But there are many agencies interested in the Aeon, and too many sides in this war. Jenkins is going to have to trust her squad, the alien Pariah, and her instincts as she faces the most dangerous decision of her career-one that that will make or break the war once and for all.
For more from Jamie Sawyer, check out:
The Eternity WarThe Eternity War: PariahThe Eternity War: ExodusThe Eternity War: Dominion
The Lazarus WarThe Lazarus War: ArtefactThe Lazarus War: LegionThe Lazarus War: Origins

Praise For The Eternity War: Dominion…

"Gripping, gritty and unsentimental - Sawyer shows us how perilous future war can be."—Michael Cobley, on The Lazarus War: Artefact

"A hostile race of alien biomechs somewhat in the mould of H. R. Giger aliens . . . terrorism, subterfuge and traitors . . . starships sporting particle beam weapons, railguns the size of skyscrapers, laser batteries, missiles . . . And then there are the uber-human super-soldiers clad in powered armour and wielding plasma weapons . . . Is that enough for you? . . . This, dear readers, is the good stuff. Recommended."—Neal Asher, author of the Agent Cormac novels, on The Lazarus War: Artefact

"A highly promising science fiction debut - a fun, gripping adventure story, with a mystery at its core that kept me turning the pages."—Gary Gibson on The Lazarus War: Artefact

"Hyper-speed entertainment from a new master of science fiction!"—William C. Dietz on The Lazarus War: Artefact

"This novel is fast-paced and stimulating, grabbing the reader at the beginning and never letting go."—Booklist on The Lazarus War: Artefact

Jamie Sawyer was born in 1979 in Newbury, Berkshire. He studied Law at the University of East Anglia, Norwich, acquiring a Master's degree in human rights and surveillance law. Jamie is a full-time barrister, practicing in criminal law. When he isn't working in law or writing, Jamie enjoys spending time with his family in Essex. He is an enthusiastic reader of all types of SF, especially classic authors such as Heinlein and Haldeman.
Loading...
or support indie stores by buying on
(This book is on backorder)