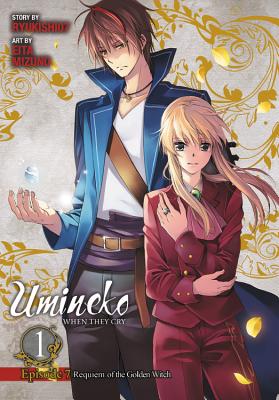 Umineko WHEN THEY CRY Episode 7 (Paperback)

Requiem of the Golden Witch, Vol. 1

By Ryukishi07, Eita Mizuno (By (artist))

p.p1 {margin: 0.0px 0.0px 0.0px 0.0px; font: 12.0px Arial} The time for logical debate and magical feints has come to an end; the revelation of the truth about Beatrice the Golden Witch is at hand. To facilitate this, game master Bernkastel has chosen Will Wright the Mage-Hunter to step onto her board and answer a single question: Who killed Beatrice? Joining him in the game is Lion Ushiromiya, Krauss's firstborn and heir, whose role is a mystery in its own right. Will's line of questioning draws together the stray strands from all the previous games, twisting them into a thread of truth, revisiting Kinzou's first encounter with the young Beatrice and working through the legends that have since sprung up around her...

Ryukishi07 leapt into the spotlight with HIGURASHI NO NAKU KORO NI which was originally conceived as a series of visual novels and later adapted into the popular manga and anime franchise.
or
Buy Here
Copyright © 2020 American Booksellers Association