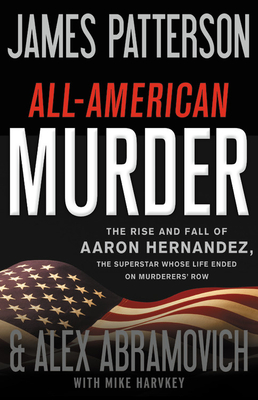 The Rise and Fall of Aaron Hernandez, the Superstar Whose Life Ended on Murderers' Row (James Patterson True Crime #1)

Discover the shocking #1 New York Times bestseller: the true story of a young NFL player's first-degree murder conviction and untimely death -- and his journey from the Patriots to prison.
Aaron Hernandez was a college All-American who became the youngest player in the NFL and later reached the Super Bowl. His every move as a tight end with the New England Patriots played out the headlines, yet he led a secret life -- one that ended in a maximum-security prison. What drove him to go so wrong, so fast?
Between the summers of 2012 and 2013, not long after Hernandez made his first Pro Bowl, he was linked to a series of violent incidents culminating in the death of Odin Lloyd, a semi-pro football player who dated the sister of Hernandez's fiancée, Shayanna Jenkins.
All-American Murder is the first book to investigate Aaron Hernandez's first-degree murder conviction and the mystery of his own shocking and untimely death.

Praise For All-American Murder: The Rise and Fall of Aaron Hernandez, the Superstar Whose Life Ended on Murderers' Row (James Patterson True Crime #1)…

"Patterson is a master."
—Toronto Globe and Mail

James Patterson holds the Guinness World Record for the most #1 New York Times bestsellers. His books have sold more than 350 million copies worldwide. He has donated more than one million books to students and soldiers and has over four hundred Teacher Education Scholarships at twenty-four college and universities. He has also donated millions of dollars to independent bookstores and school libraries.
Loading...
or
Not Currently Available for Direct Purchase