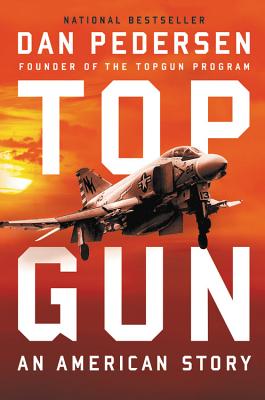 "If you loved the movie, you will love the real story in the book." -- Fox & Friends
On the 50th anniversary of the creation of the "Topgun" Navy Fighter School, its founder shares the remarkable inside story of how he and eight other risk-takers revolutionized the art of aerial combat.
When American fighter jets were being downed at an unprecedented rate during the Vietnam War, the U.S. Navy turned to a young lieutenant commander, Dan Pedersen, to figure out a way to reverse their dark fortune. On a shoestring budget and with little support, Pedersen picked eight of the finest pilots to help train a new generation to bend jets like the F-4 Phantom to their will and learn how to dogfight all over again.

Praise For Topgun: An American Story…

"If you loved the movie, you will love the real
story in the book."—Pete Hegseth, Fox & Friends

"If an institution is the lengthened shadow of a single man, then
the history of modern naval aviation might well be described as the lengthened
shadow of Dan Pedersen. Here, in direct, vivid, and unvarnished prose, is the
high-flying, supersonic tale of the Topgun program and its extraordinary
founder. Through it all, Pedersen's innovative spirit, as well as his essential
modesty, shines through."—Hampton Sides, New York Times bestselling author GhostSoldiers and On Desperate Ground

"It's hard to read Dan Pedersen's Topgun and not think of Tom Cruise rock-'n'-rollin' through the California mountains in the similarly named motion picture more than 30 years ago...a pleasure to read."—Wall Street Journal

"Pedersen's bold, white-knuckle action and passion to be the best make this an exciting book from beginning to end."—Christian Science Monitor, Best Books of the Month

"Goose and Maverick, move
over -- this is the true heart of Topgun, told
with energy, style, humor, and tactical brilliance...a masterpiece that
captures the essence of naval aviation in all its complexity and
beauty. Dan Pedersen takes us on a high-speed jet ride through the fast
times of Topgun, the Navy, and the need to fight our enemies from a position of
superiority."—Admiral James Stavridis, USN (Ret.),Supreme Allied Commander of NATO (2009-2013), chairman of the U.S. Naval Institute,and author of Sea Power: The History and Geopolitics of the World's Oceans

"With the hot-seat
velocity and cockpit realism of a military combat thriller, the author delivers
exacting details and emotional acuity....A noble,
thrillingly realized combat aviation memoir from one of America's finest."—Kirkus Reviews

"Capt. Dan Pederson became one of a handful of aviators who convinced Navy brass that a change in tactics was essential....The lives he saved though Topgun training earn him the title of American Hero."
—Washington Times

"A superb read...Dan Pedersen's Topgun is a riveting, seat-of-the-pants flight into the lethal world of the fighter pilot told by the man who started it all!"
—Dan Hampton, New York Times bestselling author of Viper Pilot and Lords of the Sky

"[A] fast-paced memoir...This remembrance of aerial derring-do is sure to
appeal to military aviators and fans of the world of fighter pilots, past and
present."—Publishers Weekly

"Teeming with white-knuckled action and the dynamic personalities who would come to define a generation of combat pilots, Topgun brings the deadly dance of air warfare alive."—Dick Couch, New York Times bestselling authorof The Warrior Elite and Chosen Soldier

"An exciting and well-written journey through
more than five decades of naval and air-combat history and the service to which
Pedersen devoted most of his life."—Booklist

"Forget the movie...This book soars...[A] remarkable inside story of how [Pedersen] and eight other risk-takers revolutionized the art of aerial combat."—Military Press

"A powerful insider's account of an important and uniquely American institution."
—The Naval Historical Foundation

"For those who will never experience the thrilling privilege of soaring at Mach 2 in the back seat of a Navy F-4 Phantom fighter, Dan Pedersen's superb memoir is the next best thing....Many aviators-turned-authors lose readers in jargon and procedures, but Pedersen's full-hearted personal narrative engages them with maverick charm, showing how he and his innovative team reinvented the art of air-to-air combat in the jet age. Topgun: An American Story is as revelatory as a freshly declassified briefing, written with the flair and insight of Tom Clancy."—Michael Fabey, author of Crashback: The Power Clash Between the U.S. and China in the Pacific

"This book is an enthralling read at a breakneck pace, capturing the
speed of aviation development from the late '50s through the early
'80s....It is in the end a story about renewal and hope for all who
dare to be the best of the best and in so doing, improve the world
around them."—U.S. Naval Institute's Proceedings magazine

"Pedersen's
soaring new memoir details the roots of America's
aerial combat crisis in Vietnam and the stunning response that resurrected
American primacy in the skies...[Pedersen] often writes with the precision and
artistry of a skywriter, especially when he describes his love of flight....[A] spellbinding
memoir."—The Charleston Post and Courier

"One of the great turnarounds in modern military
history."—CBN

"Thrilling, masterful, and meticulously detailed...Outstanding...Riveting...One of the best written, and most historically significant aviation books of the last three decades."—The Aviationist

Dan Pedersen entered the U.S. Navy in 1953. He was the senior officer in the group of nine men who formed the Navy's legendary "Topgun" program at Naval Air Station Miramar in March 1969. He served in combat during the Vietnam War, with a flying cruise on USS Hancock (CVA-19) and three on USS Enterprise (CVN-65). He retired as a captain, having accumulated 6,100 flight hours and 1,005 carrier landings while flying 39 types of aircraft. He lives with his wife in Palm Desert, CA.
Loading...
or support indie stores by buying on
(This book is on backorder)