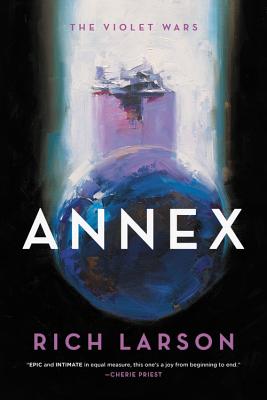 "An exciting twist on a hostile-alien-takeover drama. . .exhilarating." -- Washington Post

Independence Day meets Lord of the Flies in this "thrilling and imaginative" debut about two young outsiders forced to fight off alien invaders in a post-apocalyptic city. (Fonda Lee)

When the aliens invade, all seems lost. The world as they know it is destroyed. Their friends are kidnapped. Their families are changed.

But with no adults left to run things, young trans-girl Violet and her new friend Bo realize that they are free. Free to do whatever they want. Free to be whoever they want to be.

Except the invaders won't leave them alone for long. . .

This "warm, thrilling adventure about what happens after the end of the world" is for fans of Paolo Bacigalupi and Ann Leckie. (Cherie Priest)

Praise For Annex (The Violet Wars #1)…

"Rich Larson has an amazing knack for capturing the lonesomeness of growing up, and how much random cruelty and steadfast companionship there is in childhood. Not to mention, just how alien and scary families can be."—Charlie Jane Anders, author of All the Birds in the Sky

"Annex's combination of a likable and diverse cast of characters with breakneck, engaging action-all against the background of an evocative and sinister world-make it an accomplished and impressive debut."—Booklist

"Annex is a ferocious sci-fi fairy tale--a warm, thrilling adventure about what happens after the end of the world. Both epic and intimate in equal measure, this one's a joy and a blast, from beginning to end."—Cherie Priest, author of Boneshaker and I Am Princess X

"Rich Larson presents a uniquely compelling apocalypse--equal parts frightening and touching."—Alex White, author of A Big Ship at the Edge of the Universe

"A thrilling and imaginative entry into the alien invasion genre with two fierce and desperate young protagonists you won't be able to stop rooting for."—Fonda Lee, Nebula-nominated author of Jade City

"Larson's breakneck pace end up making [Annex] exhilarating, and well worth waiting for the next volume."—Locus

Rich Larson was born in Galmi, Niger, has studied in Rhode Island and worked in the south of Spain, and now lives in Ottawa, Canada. His work appears in numerous Year's Best anthologies, as well as his debut collection Tomorrow Factory, and has been translated into Chinese, Vietnamese, Polish, French, Czech and Italian. Besides writing, he enjoys travelling, learning languages, playing soccer, watching basketball, shooting pool, and dancing kizomba.
Loading...
or
Not Currently Available for Direct Purchase