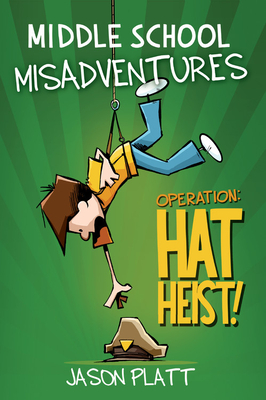 In Jason Platt's second Middle School Misadventures graphic novel, Newell's favorite hat gets taken away! With the help of his most talented friends, he concocts the perfect plan to get it back. Operation: Hat Heist is a go!
Newell's favorite show of all time is The Captain! Newell is beyond excited when he learns that the Captain himself, Patrick O'Shaughnessy, will be at Monster Comic Con. He can't wait to meet The Captain wearing his once-worn-by-The-Captain WWII crusher hat that his dad gave him. But when Newell brings the hat to school, it gets stolen from his backpack! Fart.
When Newell finally spots the culprit wearing his hat in the hall, Mr. Todd confiscates it and reminds the students, "There are no hats to be worn in school!" Double fart. What will Newell do?! He wants his hat back so he doesn't let his dad down and so he can impress his hero, but Mr. Todd refuses to return it! Just when Newell is about to give up, he receives a note from 8th grader Ethan: "I have an idea. Also, bring your friends. They can help too." Can Newell, Ethan, and this ragtag group of friends pull off the perfect hat heist?
In this fun and imaginative full-color graphic novel, Jason Platt sends fast-talking, daydreaming, Newell on another desperate quest to save his favorite hat before he meets his all-time hero.
This title will be simultaneously available in paperback.

Praise for Middle School Misadventures:
"This hilarious graphic novel is a great read for anyone in middle school or for adults who know someone that age."—School Library Connection

"Bill Watterson-flavored artwork in full color makes this adventure entertaining and approachable even to novice graphic novel readers, yet Platt's humor is refreshingly distinct in both text and image."
—BCCB

"Newell's story is filled with a building anxiety that will fill middle-schoolers with urgent suspense and the sweet relief of recognition."
—Booklist

Praise for Middle School Misadventures: Operation: Hat Heist!:
"This is a humorous tale of friendship and family that will appeal to readers who have graduated from Dav Pilkey's Captain Underpants series or those who have not yet tried Jeff Kinney's Diary of a Wimpy Kid series."
—School Library Connection

"Platt's art style is reminiscent of Bill Watterson's Calvin & Hobbs, which creates the perfect tone for over-the-top emotions and pratfalls. He manages to replicate the crazed jumbo of daydreams, wish-fulfillment, and empowerment scenarios that every kid creates in their heads."—Bleeding Cool

Jason Platt is a graduate of the Savannah College of Art and Design, and in 2016, was accepted into the National Cartoonists Society by a unanimous vote. He is also the creator of the popular webcomic series Mister & Me. He and his family live in Davenport, Iowa.
Loading...
or support indie stores by buying on