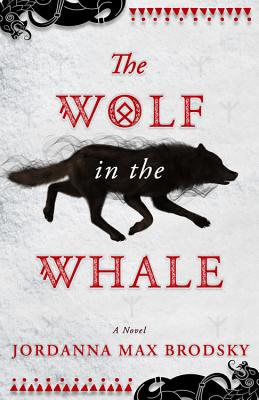 The Wolf in the Whale (Paperback)

"If you liked American Gods by Neil Gaiman or Circe by Madeline Miller, be sure to pick this one up."--Timeworn
A sweeping tale of forbidden love and warring gods, where a young Inuit shaman and a Viking warrior become unwilling allies in a war that will determine the fate of the new world.
There is a very old story, rarely told, of a wolf that runs into the ocean and becomes a whale...

Born with the soul of a hunter and the spirit of the Wolf, Omat is destined to follow in her grandfather's footsteps-invoking the spirits of the land, sea, and sky to protect her people.

Jordanna Max Brodsky hails from Virginia, where she made it through a science and technology high school by pretending it was a theater conservatory. She holds a degree in history and literature from Harvard University. She lives with her husband in Manhattan, where she is working on her next novel.

Praise For The Wolf in the Whale…

"An epic, sweeping tale of self-discovery....An intriguing story and a fantastic finale. It felt like a story worth telling and definitely one worth reading."—Hypable

"Truly an epic journey. Inspired by Inuit history, culture and mythology, the author has crafted an imaginative and compelling story in which human, animal and god alike struggle for survival in the stark environment of America's far north. Young shaman Omat is a memorable protagonist."—Juliet Marillier, author of the Sevenwaters series

"Brodsky takes the one surviving record of a meeting between the Norse and the Inuit and spins it into a compelling and fast-paced tale."—Kirkus

"Absolutely stunning....This epic, sprawling standalone fantasy novel should not be missed. It will be one that stays with me for quite some time."—Fantasy Book Review

"A propulsive, deeply researched glimpse into a time and place that will be familiar to few, and which proves to be as fascinating as any fictional universe."—B&N Sci-Fi & Fantasy Blog

"Brodsky's research shines through....The pages fly by in a tense narrative that manages to be both epic in scope and deeply personal."—Timeworn
or support indie stores by buying on
Copyright © 2020 American Booksellers Association