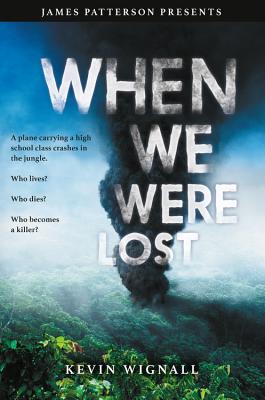 When We Were Lost

When their plane crashes in a remote rainforest with no adults left alive, a group of high school students struggles to survive against sinister threats from the jungle -- and one another -- in this tense thriller.
Tom Calloway didn't want to go on a field trip to Costa Rica, but circumstances had him ending up sitting in the back of the plane -- which was the only part that was intact after the crash in the remote South American wilderness. Tom and a small group of his classmates are fortunate to be alive, but their luck quickly runs out when some of them fall prey to the unfamiliar threats of the jungle: animals, reptiles, insects, and even the unforgiving heat. Every decision they make could mean life or death.
As the days go by and the survivors' desperation grows, things get even more perilous. Not everyone can cope with the trauma of seeing their friends die, and a struggle for leadership soon pits them against each other. And when they come across evidence of other people in the middle of the rainforest, does that mean they're safe -- or has their survival come to an even more vicious end?

Praise For When We Were Lost…

"The constantly building tension and dread will propel even the most reluctant readers through to the end."—Booklist

"An adrenaline-fueled adventure, which meditates on fate while exploring the effects of adversity and grief. Nuanced character interactions help ground the action-studded plot."—Publishers Weekly

"To survive the heat and predators, the group will have to rely on their skills and each other-easier said than done when insecurities and stubbornness become lethal...The tried-and-true tropes of survival narratives along with empowering teen expertise are featured well."—Kirkus Reviews

"Equipped with only what they've scavenged from the plane, Tom and his surviving classmates must try to escape through a hostile environment aswarm with predators. Mr. Wignall's cool tone and light touch keep an intense, exciting story from seeming far-fetched."—The Wall Street Journal

"A brilliant blend of modern adventure and Lord of the Flies, When We Were Lost is a riveting contemporary page-turner and ideal reading for teenage boys."—Sarah Pinborough, bestselling author of 13 Minutes and Behind Her Eyes

Kevin Wignall was born in Brussels and spent most of his childhood living on military bases around Europe. His many novels and short stories have inspired filmmakers, musicians, and other artists. He's based in England and spends a lot of time traveling, though he doesn't like flying -- which may or may not have inspired When We Were Lost, which is in development in Hollywood as a feature film. Find updates at kevinwignall.com or follow him on Instagram @kevin_wignall.
James Patterson has had more New York Times bestsellers than any other writer, ever, according to Guinness World Records. Since his first novel won the Edgar Award in 1977 James Patterson's books have sold more than 375 million copies. He is the author of the Alex Cross novels,the most popular detective series of the past twenty-five years, including Kiss the Girls and Along Came a Spider. He writes full-time and lives in Florida with his family.
Loading...
or support indie stores by buying on