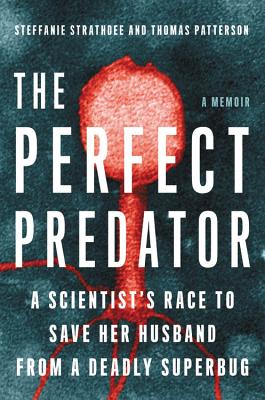 A Scientist's Race to Save Her Husband from a Deadly Superbug: A Memoir

A "fascinating and terrifying" memoir of one woman's extraordinary effort to save her husband's life (Scientific American) -- and the discovery of a forgotten cure that has the potential to save millions more.
Epidemiologist Steffanie Strathdee and her husband, psychologist Tom Patterson, were vacationing in Egypt when Tom came down with a stomach bug. What at first seemed like a case of food poisoning quickly turned critical, and by the time Tom had been transferred via emergency medevac to the world-class medical center at UC San Diego, where both he and Steffanie worked, blood work revealed why modern medicine was failing: Tom was fighting one of the most dangerous, antibiotic-resistant bacteria in the world.
Frantic, Steffanie combed through research old and new and came across phage therapy: the idea that the right virus, aka "the perfect predator," can kill even the most lethal bacteria. Phage treatment had fallen out of favor almost 100 years ago, after antibiotic use went mainstream. Now, with time running out, Steffanie appealed to phage researchers all over the world for help. She found allies at the FDA, researchers from Texas A&M, and a clandestine Navy biomedical center -- and together they resurrected a forgotten cure.
A nail-biting medical mystery, The Perfect Predator is a story of love and survival against all odds, and the (re)discovery of a powerful new weapon in the global superbug crisis.

Praise For The Perfect Predator: A Scientist's Race to Save Her Husband from a Deadly Superbug: A Memoir…

"A fascinating and
terrifying peek into the devastating outcomes of antibiotic misuse -- and what
happens when standard health care falls short."

"[A] gripping and intriguing medical thriller...This
page-turner of a couple's determination to survive also serves as a dire
warning regarding the consequences of the overuse of antibiotics."

"A thriller, a detective story, and at its core a profound romance, The Perfect Predator is [a] breathtaking story.... It's a warning of the havoc that awaits us as antibiotics lose their power, and a glimpse of the science that could hold that dark future at bay - if we can summon the funding and the political will to create it."—Maryn McKenna, Senior Fellow of the Schuster Institute for Investigative Journalism at Brandeis University and author of Big Chicken and Superbug, -

"At once terrifying and inspiring, The Perfect Predator is a brilliant race-against-the-clock medical thriller that is also a celebration of love, commitment, and the power of scientific collaboration."—Steven Johnson, New York Times bestselling author of Where Good Ideas Come From and The Ghost Map, -

"A remarkable story of love, resilience, the science of discovery, and quite possibly the future of medicine."
—Richard Horton, FRCP, FMedSci, Editor-in-Chief, The Lancet, -

"One of the single
most compelling personal stories we've ever heard."
—Arielle Eckstut and David Henry Sterry, authors of The Essential Guide to Getting yourBook Published

"A real-life medical thriller...fast paced [and] the writing is always infused with humor,
hope, and intelligence, and the couple's remarkable story is grounded in real-life
details that bring readers directly into their world. Dark, surreal poetic."

"The Perfect Predator is a compelling and heart-wrenching medical drama that would be completely unbelievable - if it weren't 100% true! Strathdee and Patterson masterfully weave together the personal, medical, and scientific strands of their battle against one of the world's worst superbugs, bringing not just Patterson, but a century-old medical technology back from the brink of death. This first-hand account of the front lines of the battle against the scourge of antimicrobial resistance underscores the human cost underlying the bland statistics."—Rob Knight, PhD, Director, Center for Microbiome Innovation, University of California San Diego and author of Follow Your Gut and Dirt Is Good, -

"[A] riveting tale...The saga reads like a
thriller....Remarkable passages from Patterson [describe] how he interpreted
events through veils of feverish delirium, pain-killer fog, and coma."

"The story of a woman fighting for her husband's life is interesting in and of itself, but this book is so much more than that. It was written by a scientist who used her public health training to discover a solution to a problem; it just so happens that the solution she found may be an answer to one of the most urgent health problems in the world."
—American Journal of Public Health

"I simply could not put down the book. It reads like a fast-paced, detective thriller."
—Madhukar Pai, MD, PhD, Professor and Canada Research Chair in Epidemiology & Global Health, McGill University, Montreal

"[A] medical thriller for the antibiotic-resistant age."
—Smithsonian

"[Tom's case is a] case that may mark a turning point in medicine."
—American Association of Medical Colleges Newsletter

"A riveting, pulse-pounding medical thriller that just
happens to be true. Steffanie Strathdee is expert at weaving science into
compulsively readable prose."

"...A memoir that reads
like a thriller."
—New York Times Book Review

"If you're looking for a gift for a young person currently considering a career
in science or medicine, this is the book to buy."
—AJTMH journal

"The Perfect Predator may be the best and most important book I've ever read... [A] personal and moving odyssey."—Louis R. Franzini, The Florida-Times Union

Steffanie Strathdee is an infectious disease epidemiologist, and Associate Dean of Global Health Sciences and Professor and Harold Simon Chair at the University of California, San Diego, School of Medicine. She also directs the new UC San Diego center for Innovative Phage Application and Therapeutics and is an Adjunct Professor at Johns Hopkins and Simon Fraser Universities. She has been named one of Time's 50 Most Influential People in Health Care.
Thomas Patterson is an evolutionary sociobiologist and an experimental psychologist. A Distinguished Professor of Psychiatry at UC San Diego, he has renowned expertise on behavioral interventions among HIV-positive persons and those at high risk of acquiring HIV and sexually transmitted infections.

Dr. Patterson and Dr. Strathdee have worked as husband-and-wife AIDS researchers on the Mexico-US border for over a decade. The Perfect Predator is their first book together.
Loading...
or support indie stores by buying on