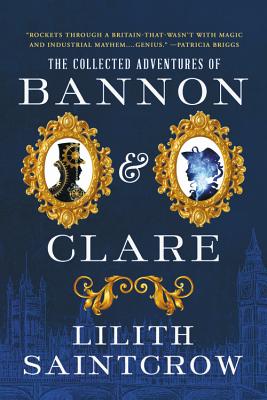 The Collected Adventures of Bannon & Clare

The Bannon & Clare series by New York Times bestselling author Lilith Saintcrow, featuring a forensic sorceress and a detective in an alternate Victorian London, now collected in a single edition for the first time.

Emma Bannon, forensic sorceress in the service of the Empire, has a mission: to protect Archibald Clare, a failed, unregistered mentath. His skills of deduction are legendary, and her own sorcery is not inconsiderable. But the conspiracy killing registered mentaths and sorcerers alike will just as likely kill them as seduce them into treachery toward their Queen.

Praise For The Collected Adventures of Bannon & Clare…

" Saintcrow scores a hit with this terrific Steampunk series that rockets through a Britain-that-wasn't with magic and industrial mayhem with a firm nod to Holmes. Genius and a rocking good time."—New York Times bestselling author Patricia Briggs on The Iron Wyrm Affair

"Saintcrow melds a complex magic system with a subtle but effective steampunk society, adds fully-fleshed and complicated characters, and delivers a clever and highly engaging mystery that kept me turning pages, fascinated to the very end."—Laura Anne Gilman on The Iron Wyrm Affair

"Lilith Saintcrow spins a world of deadly magic, grand adventure, and fast-paced intrigue through the clattering streets of a maze-like mechanized Londonium. The Iron Wyrm Affair is a fantastic mix of action, steam, and mystery dredged in dark magic with a hint of romance. Loved it! Do not miss this wonderful addition to the steampunk genre."—Devon Monk on The Iron Wyrm Affair

"Lilith Saintcrow's foray into steampunk plunges the reader into a Victorian England rife with magic and menace, where clockwork horses pace the cobbled streets, dragons rule the ironworks, and it will take a sorceress' discipline and a logician's powers of deduction to unravel a bloody conspiracy."—Jacqueline Carey on The Iron Wyrm Affair

"This isn't just fantasy with cogs stuck on. A really good read"—SFX on The Iron Wyrm Affair

"Fast paced and full of plot twists, this is a lightweight summer read for fans of Gail Carriger and Meljean Brooks."—Booklist on The Iron Wyrm Affair

"A fast and furious ride through an alternate Victorian London that occasionally stops for polite afternoon tea, just to let you catch your breath. Exciting, great characters and one of the best books I've read this year. Roll on the next instalment! "—thebookbag.co.uk on The Iron Wyrm Affair

"A fast-paced blend of Victorian-era urban fantasy and steampunkish technology."—Shelf Awareness on The Iron Wyrm Affair

"An absolute delight to read."—Portland Book Review on The Red Plague Affair

"Promises excitement and chills and delivers the goods."—Booklist on The Ripper Affair