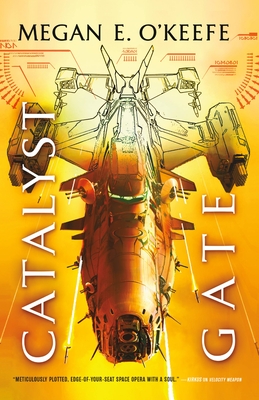 The universe is under threat and an ancient alien intelligence threatens to bring humanity down unless Major Sanda Greeve and her crew can stop it in the final book of this explosive Philip K. Dick award nominated space opera.
The code has been cracked. The secrets of the Casimir gates have been revealed. But humanity still isn't safe. The alien intelligence known as Rainier and her clones are still out there, hell-bent on its destruction. And only Sanda can stop them.
With the universe's most powerful ship under her command and some of the most skilled hackers, fighters, and spies on her team, it will still take everything she has to find the key to taking down an immortal enemy with seemingly limitless bodies, resources, and power.

Praise For Catalyst Gate (The Protectorate #3)…

"O'Keefe delivers a complicated, thoughtful tale that skillfully interweaves intrigue, action, and strong characterization. Themes of found family, emotional connection, and identity run throughout, backed up by strong worldbuilding and a tense narrative. This series opener leaves multiple plot threads open for further development, and readers will look forward to the next installments."—Publishers Weekly on Velocity Weapon

The final installment of the Protectorate series is a fitting and satisfying conclusion. Readers who enjoy space operas, strong female leads, and rooting for the little guy will love this whole series.

Megan E. O'Keefe was raised amongst journalists, and as soon as she was able, joined them by crafting a newsletter which chronicled the daily adventures of the local cat population. She has worked in both arts management and graphic design, and has won Writers of the Future and the Gemmell Morningstar Award.
Megan lives in the Bay Area of California.
Loading...
or support indie stores by buying on